All the initiatives of Menarini to spread awareness on a topic which threatens global health.

The use of antibiotics has changed our lives forever. Diseases that in the past could cause death (such as pneumonia) nowadays can be cured through an antibiotic therapy prescribed by the doctor.
However, the increasingly widespread antibiotic resistance represents, as the WHO has stated, “a slow tsunami that threatens to wipe out a century of medical progress”.

World Antimicrobial Awareness Week (WAAW) aimed to increase awareness of global antimicrobial resistance (AMR) and to encourage best practice among the population, health workers and policy makers in order to overcome the further emergence and spread of drug-resistant infections.

The slogan for the WAAW 2020 was “Antimicrobials: handle with care” and the theme for the human health sector was “United to preserve antimicrobials“.

Why is it important to preserve antimicrobials?

AMR presents a global public health threat. It is a dynamic phenomenon that occurs when bacteria, viruses, fungi, and parasites resist the effects of medications, making common infections harder to treat, increasing the risk of disease spread, severe illness and death.

Over the years, the use and misuse of antimicrobials in humans, animals and plants, poor prescribing practices and lack of patient adherence, global travel and trade, have accelerated the threat of AMR worldwide. Consequently, an increased number of infectious diseases have become difficult to manage, with dramatic health and economic impact.

The consequences of AMR on health and healthcare systems are extraordinary. It has been estimated that multidrug resistant infections cause approximately 700,000 deaths worldwide each year. Unless action is taken, it is projected that the burden of deaths from AMR could reach 10 million each year globally by 2050.

Modern medicine has made countless advances, thanks to which some treatments (such as chemotherapy, advanced surgery and organ transplantation) are nowadays considered routine. However, the antibiotic resistance is threatening these extremely delicate operations, too. 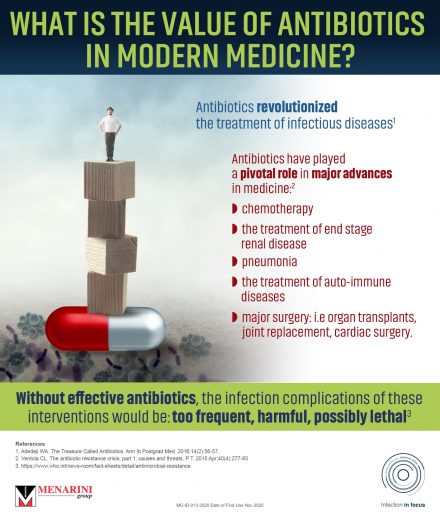 Antibiotics need to be used appropriately to preserve their effectiveness and slow the emergence of new resistance.

There is a need for urgent action: everyone must play their part. Menarini is actively involved in the fight against antibiotic resistance.