The XXV edition of the Menarini International Fair Play Award: a fresh start through the values of sport 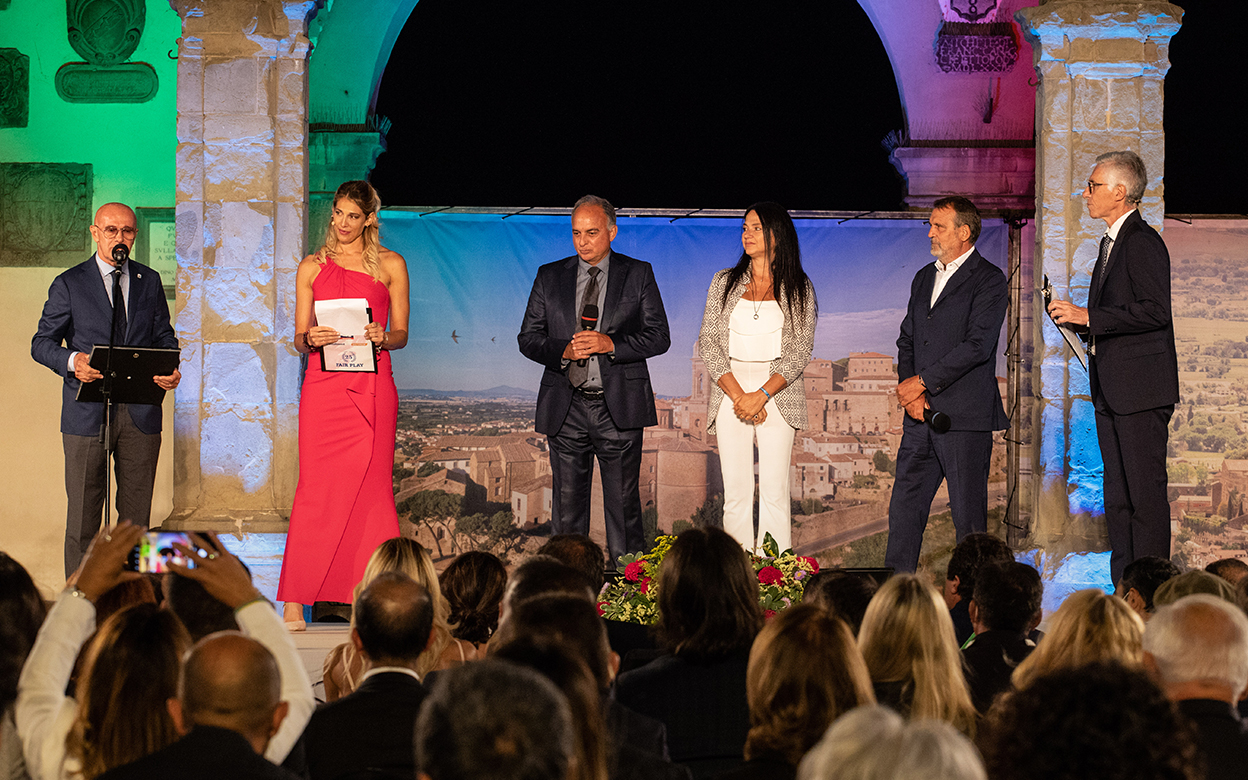 The Menarini International Fair Play Award is one of the most important awards in the sports world, and has the purpose of rewarding athletes who built their careers on the solid foundation of fair play, thus transforming their agonistic path into an exemplary role model, from which the new generations can draw inspiration.

Menarini Group has been proud to be the Title Sponsor of the event for the past 9 years as a strong supporter of fair play, a notion that is not limited to simply abiding by the rules, but is rather linked to, and presupposes, other important values such as friendship, respect for others as well as for opponents, and sportsmanship.

The same principles can be found on a daily basis in Menarini’s corporate mission in which work ethic, valorisation of teamwork and the promotion of a culture of health are essential.

A rich program of events

The Menarini International Fair Play Award hosted an exciting introductory night in Piazzale Michelangelo, overlooking the incredible panorama of the city of Florence.

The event was a moment of welcome for all the award winners and the Fair Play ambassadors in the world. The evening was opened by Ennio Troiano, Corporate Director of Human Resources of the Menarini Group, in order to emphasize the climate of confidence surrounding the event and to send out a positive message of recovery after difficult months.

The large number of champions who attended the event was greeted by the Vice President of the Italian National Olympic Committee (CONI) and new Fair Play ambassador Silvia Salis, winner of national and international titles in the hammer throw discipline, who had already talked about the collaboration between the highest Italian sports institution and Fair Play Menarini during the presentation press conference: “CONI has always supported this event, because one of the greatest values of sport is precisely Fair Play.
As a source of inspiration for millions of generations, it is something that allows a sporting message, a victory, a result, to become an ethical and moral message as well. We support behaviour based on Fair Play, because the athletes’ goal is to win, but there are right and wrong ways to do it.”

A particularly moving moment was the commemoration of Paolo Rossi (to whom the Model for the Younger Generation Award has been named) in the words of Hans-Peter Müller, former football champion who, together with Marco Tardelli, has received the 2021 edition award. Hansi was “Pablito’s” rival in the Italian football championship in the 1980s. “Paolo and I shared the joy of becoming fathers at the age of 53.
When I received the news of the Award from his wife Federica I was touched. Paolo was not only a great champion on the field, but also off it.
We took part in charity events together and on those occasions I got to know his more humble, modest side. Although he won everything as a player, he remained a simple person, never forgetting about his origins.”

The evening saw the presentation of Fair Play bracelets to the attending sportsmen and sportswomen. 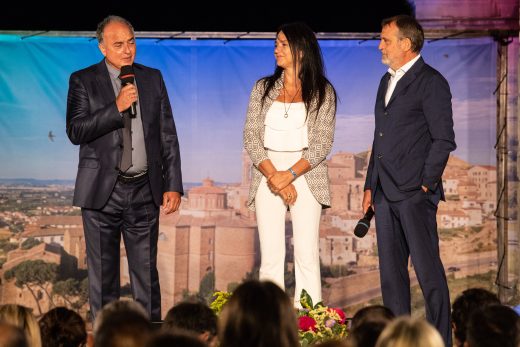 The Awards Ceremony in Castiglion Fiorentino

The splendid setting of the Loggiato Vasari in Piazza del Municipio in Castiglion Fiorentino, embellished for the occasion by a spectacular scenography, hosted the final evening, as well as the twenty-fifth edition of the Menarini International Fair Play Award.

On Wednesday 1 September the award ceremony took place, during which great champions and leading figures in international sport received the most important recognition to the values of Fair Play, of loyalty, tolerance and solidarity.

The ceremony was broadcast live on Sportitalia, presented by journalist Lorenzo Dallari and former volleyball player Rachele Sangiuliano, who marked the moments of the evening by giving space to the testimonies, anecdotes and successes of the protagonists present in Castiglion Fiorentino to receive the prestigious award.

“We are celebrating the first twenty-five years of the Menarini Fair Play Award: an incredible achievement in an exceptional year for Italian sport – said Ennio Troiano, Corporate Director of Human Resources of the Menarini Group – We hope that the values of Fair Play, based on shared principles embodying the true essence of sport, will help us look to the future with optimism.” 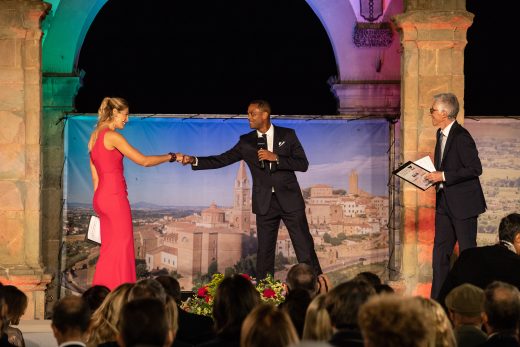 There were emotional moments when Federica Cappelletti, wife of the iconic football player Paolo Rossi, took the stage. This year, the special “Model for the Younger Generation” award was named after him. The award was presented to Marco Tardelli and Hansi Müller and handed over to them by Arrigo Sacchi. Together on stage they brought the memory of their great friend and adversary of many sporting challenges.

Open applause for the Tokyo 2020 champions Valentina Rodini and Federica Cesarini, winners of the first Olympic gold medal in the history of women’s rowing, who received the special “Italy at heart” Award. The “Sustenium Energy and Heart” award went to former international referee Pierluigi Collina, while the “Narrating emotions” category, established in memory of the unforgettable Franco Lauro, was won by Mediaset sports journalist Lucia Blini. 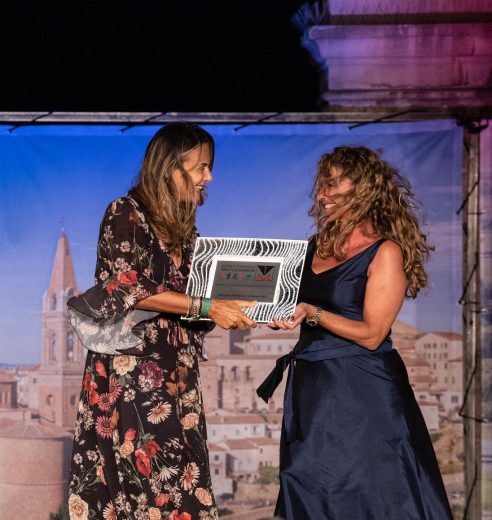 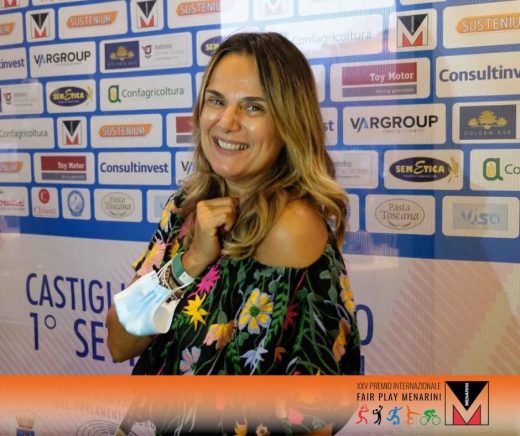 For the category “Career in Fair Play” the Swedish tennis player Stefan Edberg, renowned for his backhand on the court, received the award from Riccardo Nigi, Director Consumer Healthcare Italy of the Menarini Group.
The special Award “Study and Sport” went to the young race walker Sofia Fiorini, from the Fiamme Oro Sports Group. A special and exciting edition that saw the biggest stars of Italian sport shine, and conveyed, after the restrictions of the previous editions, a much-desired feeling of rebirth.

Lastly, one of the most important moments of the evening was the official presentation of the stamp dedicated to the XXV edition of the Mecenate Fair Play Award: a “celebratory” stamp belonging to the “Sport” thematic series, which will be issued by the Ministry of Economic Development.

Below are all the prizes awarded during the XXV Menarini International Fair Play Award: