The Volpi Rosse Menarini are ready for a great 2023, between the A Series and the European Championship 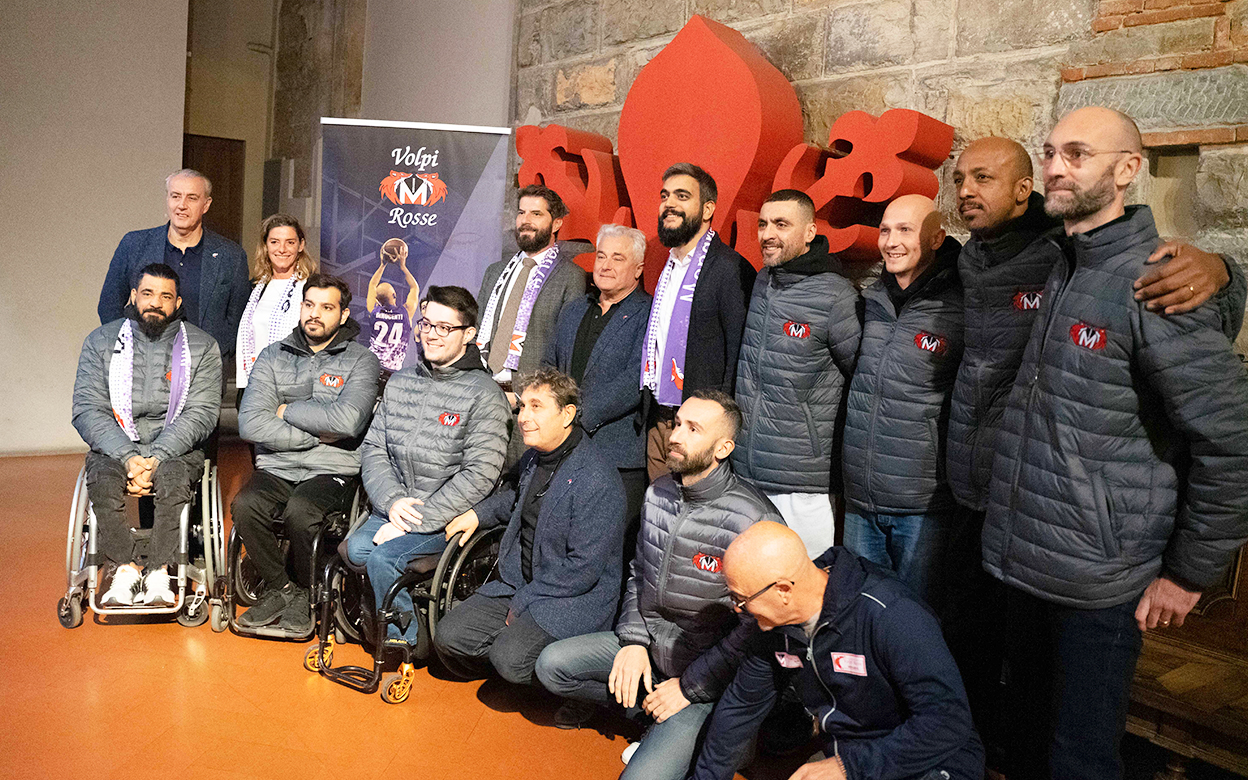 As a successful 2022 comes to a close, the Florentine wheelchair basketball team Volpi Rosse Menarini is ready to face a new year of challenges, on and off the court.

After a positive debut last season in which they finished eighth in the top league, the Volpi Rosse Menarini are back on the court to compete against the best Italian teams in the A series.

A challenging national championship, with their opponents representing 7 Italian regions: Marche, Abruzzo, Sardinia, Veneto, Calabria, Lombardia and, of course, Tuscany, where the team coached by Marco Bergna is at the top of the local movement, having Florence as its beating heart.

The planning of the new championship has been a long, but satisfying process. Building a competitive roster required teamwork even behind the scenes, where President Ivano Nuti was able to interpret the needs of the entire environment in the best possible way. The player market hasn’t been easy, with both reconfirmations and new additions, while the technical project has been entrusted to the aforementioned coach Marco Bergna, whose experience is indisputable. Lastly, the new season also marks the return to the “family” of an important player such as Samuele Cini.

These and other novelties were presented on Thursday, November 24, during a press conference at Palazzo Vecchio in Florence. An opportunity to meet with institutions and welcome the encouragement of Councillor for Sport Cosimo Guccione, who remarked how the Menarini Red Foxes keep on making the city proud.

Words of praise that were followed by those of Ennio Troiano, Global Head of Human Resources Menarini.

“We started with a team of promising youngsters who trained every day and struggled to find a gym and the athletes to play. Today we are facing an incredible reality. These kids are an example of how you can play sports no matter what physical abilities you have; in fact those same abilities can be used to win and achieve important results. Menarini will continue to support the Volpi Rosse, because this is now an inseparable partnership. Just as one it’s impossible to talk about the Fair Play Award without saying Menarini, it’s impossible to talk about the Volpi Rosse without saying Menarini.“

The new championship, which kicked off last October 15, sees the Florentine team in the B group of the A series, where the balance is in the black thanks to a score of 3 victories and 2 losses. The Menarini Group, which has been accompanying the boys on this path of integration, inclusion and life since 2011, is cheering them on.

“We continue this fantastic adventure alongside the Volpi Rosse Menarini, who are an example for all of us with their strength and tenacity,” said Lucia and Alberto Giovanni Aleotti, shareholders and members of the Menarini Board, “Seeing these boys grow both professionally and personally is incredibly exciting: we are proud of the exponential journey they embarked on and we wish them the best of luck and satisfactory results in the next season.”

These results may also come from the new European dimension in which the team will be playing. From April 27-30, the Euro Cup tournament is scheduled in the Burgundy region of France.

A novelty that assistant coach Antonio Calamai commented on, starting with what gave rise to it all: the first, historic 2021/22 A series championship.

“Last year, when we made our debut in the A series, the impact was strong. The leap from B series to A series is much wider than you might think. We were confronted with physicalities we were not used to, with players who were highly trained at the level of pushing, braking and contact.
At first the higher intensity of the matches was challenging for us, and we’ve taken a few beatings that helped us improve the following performances. As a matter of fact, as the season went on we had some brilliant victories, the group gained confidence, and the championship ended positively. – Calamai goes on to talk about the Euro Cup – The new international dimension will be a new discovery for us. We do not know the group yet, but it is clear that it will be a great opportunity for growth. As of right now, on a technical level the Spanish and English teams are slightly ahead of us, but I am sure we will be ready by relying on the great motivation that distinguishes us.“

The upcoming international championship makes the whole team proud and puts the players into new scenarios, but the goals of the Volpi Rosse Menarini sports project remain unchanged.

“We have a group of young people in whom we believe a lot,” President Nuti concluded, “There are athletes who come from different parts of the world, and there are also many players who aspire to play in our team. However, the desire to win must never make us lose sight of those values offered by sport. Values that teach us to see people as they are, for what they are able to express and for what they are able to do in their lives, without distinction between able-bodied and disabled.”