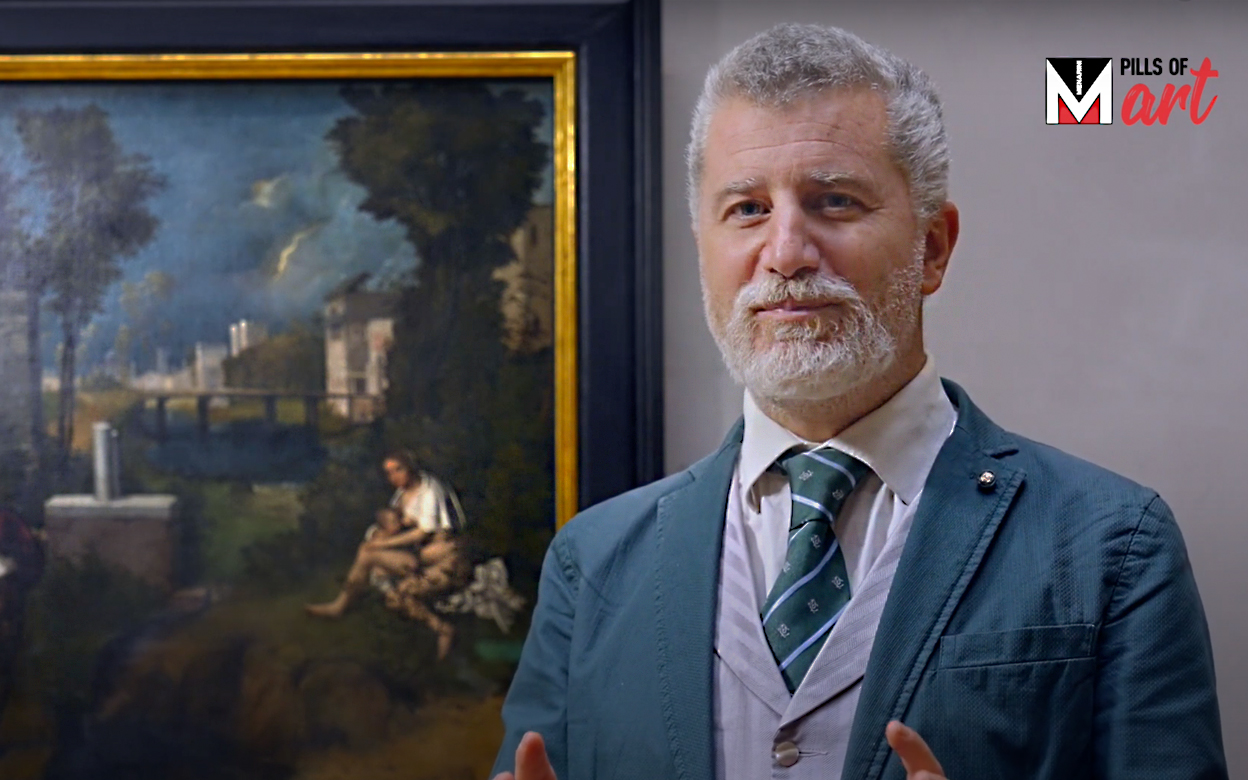 Giorgio Zorzi da Castelfranco, known as Giorgione (c. 1478 – 1510), was one of the most important exponents of the Venetian school and one of the most mysterious figures in the history of painting: very little is known about his life, the attribution of his works is difficult, and even the meaning of his paintings gives rise to discussions among art scholars. He was active on the Venetian painting scene for about ten years, but he had a deep impact on art as a whole, marking the beginning of the artistic style of the ‘Maniera Moderna‘.

On the occasion of the release of Giorgione’s monograph written by Giovanni Carlo Federico Villa for Menarini’s Art Volumes, the Renaissance art historian leads us to discover the paintings of this incredible artist with two Menarini Pills of Art videos: The Tempest and The Virgin and Child with Saints.

An aura of mystery surrounds not only the person of Giorgione, but also one of his most famous works: The Tempest, painted in oil on canvas around 1505. The painting depicts a rural landscape that reminds of the countryside around Padua, immersed in the gloomy atmosphere before a storm. In the background we see some city buildings, bearing the coats of arms of Padua and Venice and struck by the somber glow of the first lightning bolt. A lone heron on a roof seems to be observing the black clouds, heavy with rain.

In the foreground, ancient ruins recall the past and the inevitable passage of time.
On either side of the composition we find two figures: in the words of art collector Marcantonio Michiel (1484 – 1552) “una cingana e un soldato“, a gypsy woman, breastfeeding her child and looking restlessly at the viewer, and a soldier. It is unclear whether there is a relationship between the two characters, an element that adds to the mystery of the work.

Giorgione’s painting technique is described as “tonal” or “atmospheric“, and not by chance: in The Tempest, the masterful use of colour brings out every detail of the scene, and the whole painting seems to be imbued with the still, electric atmosphere that comes before great storms.

The Virgin and Child with Saints

In this small painting, made in oil on panels around 1505, we find a perfectly balanced composition. On the right, the Madonna holds the Child on her knees, while on the left we can see St John the Baptist and St Catherine of Alexandria, identified by the wheel of martyrdom. The centre of the painting is represented by the hills that can be seen beyond the window and the slender astylar cross held by Saint John the Baptist, foreshadowing Christ’s crucifixion on Mount Golgotha.

Once again, the application of tone-on-tone colour, layer after layer, produces a soft, plastic effect that allows a fusion between the subjects and their surroundings, and defines shapes and spatial depth with light/shadow effects obtained only through variations in colour, without the use of chiaroscuro. This technique would pave the way for masters of painting such as Titian and Palma Vecchio, and would consecrate Venetian painting throughout Europe for centuries to come.

Despite his early death at the age of 31-32 in the autumn of 1510 during a plague, Giorgione managed to have a lasting and significant impact on art history, which is why Menarini decided to publish his monograph as part of the Art Volumes series. In the words of Giovanni Villa, author of the volume:

“Writing about Zorzi da Castelfranco, known as Giorgione, means dealing with one of the most iconic artists of the European Renaissance.

Writing about Giorgione means dealing with the legend that surrounds him, the legend of the most paradoxical and elusive painter of the 16th century.

Writing about Giorgione means telling the story of The Tempest, one of the most controversial and enigmatic paintings in the history of Western art.

Writing about Giorgione for Menarini means taking further steps down a 65-year-long path: the path of art monographs, one of the finest moments of writing for an art historian aware that he is addressing curious readers, many of whom have grown up with Menarini’s Minuti.”