Menarini Pills of Art: The Story of Lucretia by Filippino Lippi 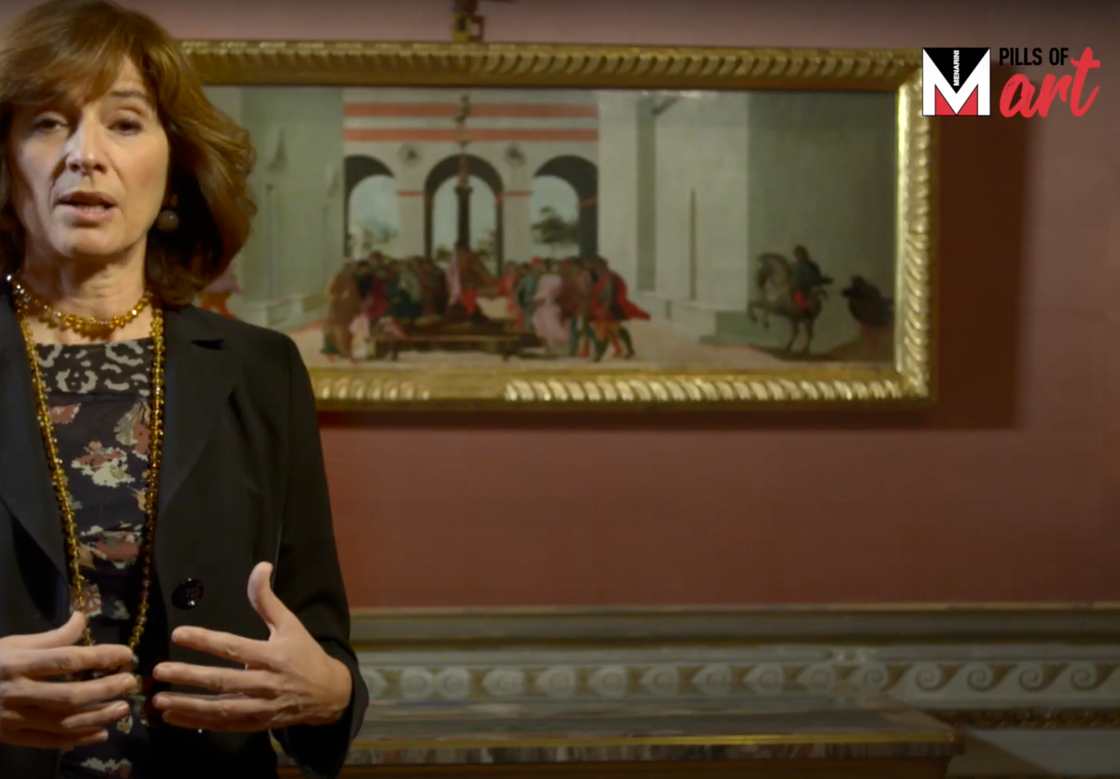 Florence, Palatine Gallery of Pitti Palace, Room of Ulysses. Here, Olivera Stojovic, expert in Florentine Art, introduces to us a youthful work by Filippino Lippi: The Story of Lucretia.

The painting shows the death of Lucretia, and was combined with another panel – also by Lippi – representing the story of another Roman heroine, Virginia (now in the Louvre). The similar size and style of the two paintings suggested that they were originally parts of a wedding chest.
However, the strong political content concerning the vicissitudes of the two heroines – symbols of revolt against tyranny and injustice – has also led to the hypothesis that the two panels were both intended to decorate a Florentine palace.

The myth of Lucretia

Lucretia, faithful and modest wife, was raped by the son of the last king of Rome, Sextus Tarquinius, to whom she had given hospitality while her husband, the politician Collatinus, was absent. The woman told her father of the rape before killing herself with a knife to the chest to save her honour. After this episode the people of Rome rebelled against King Tarquinius Superbus, giving life to the Republic.
Lucretia puts aside her life to save her reputation and her family name: private tragedy becomes a public act. Whereupon, the story became very popular in Florence during the Renaissance, as an example of civic virtue.

A large dose of emotion and dynamic tension were given to this art piece – painted in tempera on panel – summarizing the story of Lucretia in three episodes, reported by the Roman historian Titus Livius.
In the left part of the panel, Lucrezia, already dead, is taken out of her home by a group of men; in the centre, she is laid out on a catafalque for her funeral, depicted in a Roman square; on the right, instead, among the crowd a man on horseback, Lucius Junius Brutus, is seeking revenge for the woman, inciting people of Rome to rise up and overthrow the king Tarquinius Superbus, thus putting an end to the monarchical era. On a figurative level, the story is divided into three areas, the scenes are classically defined and rhythmic in the forms, such as the central portico and the cubic buildings to the extremities; on the other hand, the warm and light colors of the garments in contrast with darker shades, create an interplay of light and shadow.

This youthful artwork by Filippino Lippi was inspired by the work of his mentor, Sandro Botticelli.

In 1472, at the age of fifteen, Filippino sets foot in Botticelli’s workshop and was always inspired by the grandmaster; indeed, the authorship of The Story of Lucretia was attributed to Botticelli, albeit early corrected. The two prototypes from which the artist drew inspiration in painting the panels collected at Palazzo Pitti and Louvre are precisely two works by his mentor, having Lucrezia and Virginia as subjects. The numerous affinities with the works of his maestro suggest that Filippino painted Lucrezia’s panel around 1475-1478, before being called to complete Masaccio’s decoration of Brancacci Chapel in the early eighties.

The artwork reflects the strong admiration of the Florentine people towards the heroic Lucretia, and shows – although with some clumsiness in the perspective between figured and architecture – a great emotional intensity, full of poignant melancholy and devoid of rhetoric, clearly visible in the faces and suffering poses of the characters.

ART FOR EVERYONE! Menarini Pills of Art Junior: a new amazing series for the youngest.