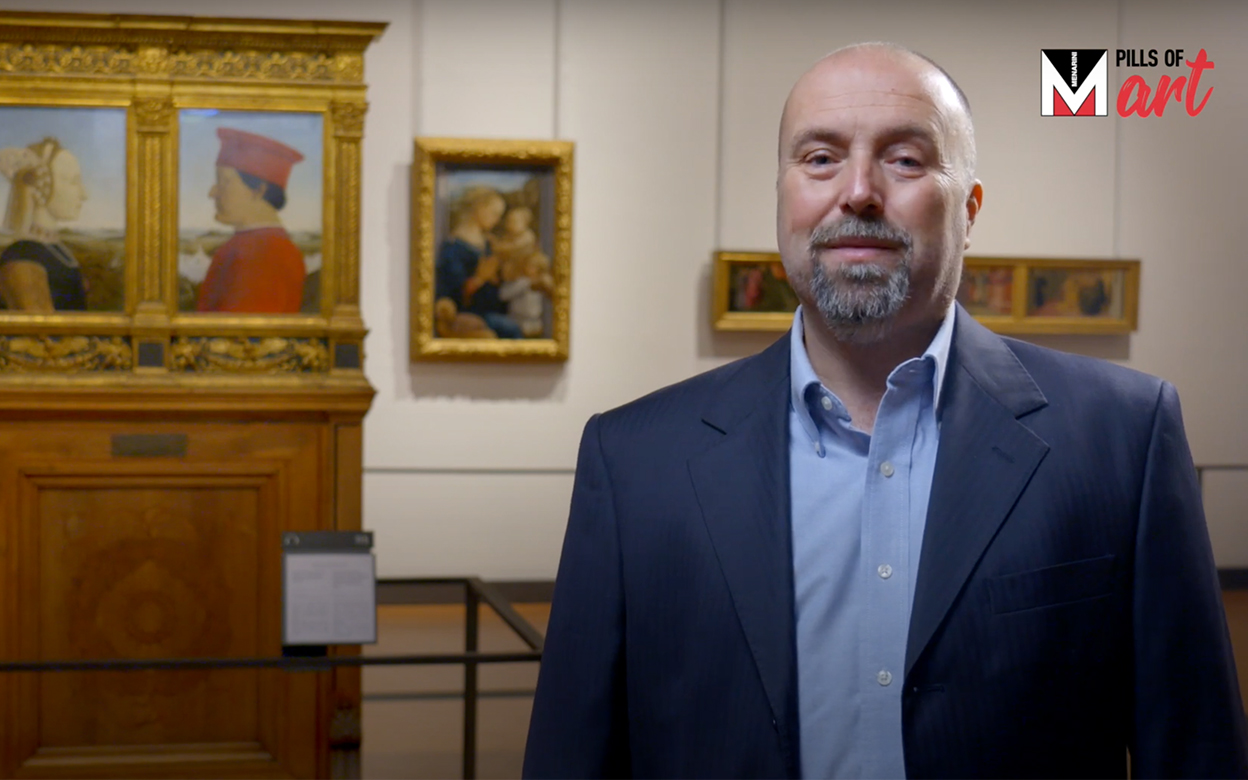 Walking in the finest court of Urbino at the time of the Italian Renaissance, the art expert Bernardo Randelli makes us discover a masterpiece by Piero della Francesca, which is nowadays a true icon of the Uffizi Gallery: the Diptych of Federico da Montefeltro and Battista Sforza, also known as the double portrait of the Dukes of Urbino.

One of the most popular portraits of the Italian Renaissance

Diptych literally means «two fold». The term comes from the ancient Greek and was traditionally used to indicate a pair of wooden panels (or ivory) joined by a hinge, or two separate paintings enclosed in double frames. The purpose was commemorative and the subjects most represented were high officials, saints or the list of high ecclesiastical dignitaries. In perfect tune with the fifteenth-century tradition, the Diptych depicts the Dukes of Urbino: Federico da Montefeltro (1422-1482) and his wife Battista Sforza (1446-1472). The artwork, in fact, dates back to 1473-1475, when Piero della Francesca was serving in the court of Urbino.

The two portraits, oil painted on two small wooden panels (47 x 33 cm each panel), are now separated from each other, but they were originally joined by hinges that allowed the panels to open and close like a book, suggesting an intimate and private function.

The couple is depicted in profile, according to the Roman numismatic tradition, the woman on the left and the man on the right are facing each other. The Duke of Urbino was actually always represented on his right side for reasons of decorum, since he had lost his right eye in 1450.

The chromatic contrast between the Federico’s bronze skin tones and the fair complexion of Battista is striking. The pallor of the Duchess not merely respects the aesthetic conventions which were fashionable during the Renaissance, but could also allude to her early death.

Battista wears a precious dress and jewels, depicted with meticulous attention to detail – unequivocal proof of the painter’s proximity to Flemish art – which allows to easily guess shapes and materials of the jewellery.
The gold chain around the neck of the Duchess is hung a large pendant with a ruby in the centre, which is – like fire – the symbol of love and charity. Embellishing Battista’s neck and her hairstyle are also the gems, symbol of virtue – the idea originated in medieval literature, but it is quite often adopted in Renaissance painting, too.

Federico – a noble warrior who combined military ability with a high consideration of culture – is painted by Piero della Francesca with a raw sense of reality, which could almost appear irreverent. The olive complexion of his face, the growths of the skin, the wrinkles, the damaged nose due to an accident during a tournament, the raised eyebrow as a sign of disbelief, nothing is spared to the Duke. The painter seems to say that the value of the person does not lie in the appearance, but it lies in his own essence. And he is a silent, magnificent idol standing on the view of his lands.

The rolling landscape in the background is the symbol of the Duke’s earthly power, depicted with Flemish precision, and emphasizes the serene and comforting union of the couple.

The perspective view is perceived thanks to the progressive loss of details and obtaining the sfumato just with color. Therefore, the painter marries the strict approach to perspective learned during his Florentine education with the lenticular representation of the nature more characteristic of Flemish painting, achieving extraordinary results and unmatched uniqueness.

The back of the portraits are painted with scenes of allegories of triumphs. Latin inscriptions – painted as if they had been carved on marble barriers – celebrate both Federico, who is equated to the great military leader of ancient times, and Battista, who was always accompanied by modesty. White stallions pull Federico’s triumphal car, symbols of power; the Duke is crowned by Fame and accompanied by the cardinal virtues, which also characterized his government: Prudence, Fortitude, Justice and Temperance. Battista’s triumphal car is pulled by unicorns, which symbolize chastity and fidelity, and is accompanied by her virtues: Charity, Faith, Chastity and Modesty. The inscription celebrating her praises has the verb in the past, which could mean that at the time of the painting the Duchess had already died.
Therefore, it is likely that the Duke of Urbino commissioned the Diptych to have a sweet memory for himself wishing to be forever tied to the young wife, who died just twenty-six years old.

Critics of the fifteenth and sixteenth centuries – although usually very generous in distributing hyperbolic praise, even to artists of little (or no) merit – took almost no account of the painting of Piero della Francesca.

The artistic life of the painter was deeply influenced by the attendance of the humanistic courts of Urbino, Ferrara and Rimini.
This is an aspect of considerable importance that has allowed him to deepen his knowledge of Flemings, already approached during his youth through his master Domenico Veneziano.
The later phase of his production shows a convinced adherence to Flemish tradition and light effects modulated on colors and materials. The first work in which this Flemish influence is clearly evident is the Diptych of Federico da Montefeltro and Battista Sforza.

One of the most famous works by Piero della Francesca, the double portrait is representative of the relationship between the painter and the Duke and Duchess of Montefeltro.
Piero was a frequent guest at their court, finding himself in a cultured and refined atmosphere which would soon become one of the most important cultural and artistic hearts of Italy. And the person who made possible the rise of Urbino – from capital of an economically depressed territory to one of the most prolific Renaissance centers – was Federico da Montefeltro.