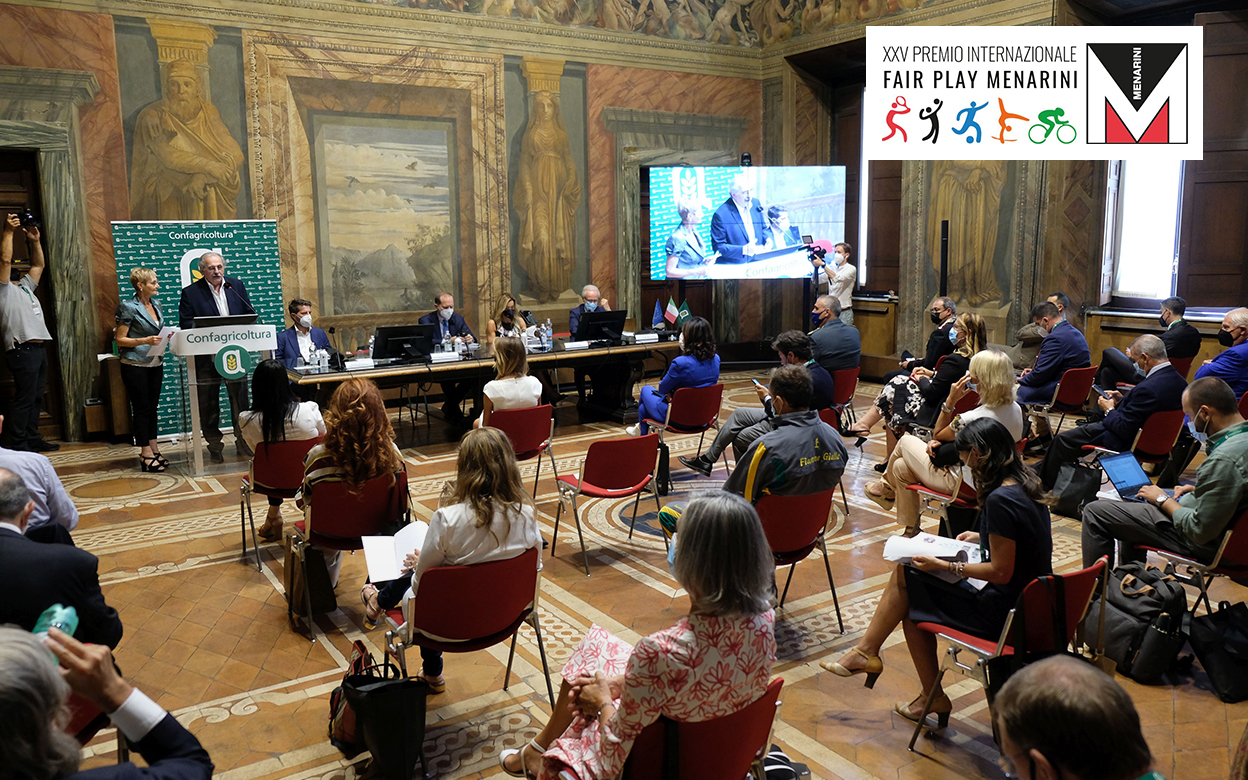 The XXV International Fair Play – Menarini Award was officially announced last Thursday, July 15th, 2021, during the Press Conference taking place in Rome, at the national headquarters of Confagricoltura – for years partner of the event – and broadcast live streaming on Facebook. This edition is set to reach new heights in celebrating its 25th anniversary in an amazing – although still critical, because of Covid – moment for Italian sport, thanks to the successes of the Italian National Football Team at the Euro 2020 championship; Matteo Berrettini, the first Italian player to reach Wimbledon final and the Italian National Basket Team, taking part in the Olympics (Tokyo 2020) for the first time after 17 years.

The International Fair Play Menarini – Award, established in 1997 with the intent of highlighting the true sportsmanship, has in its 25th edition great ambitions in terms of emotions and quality. «In the last 9 years, a very important fellow traveller supported us: Menarini», stated the event committee. «With Menarini we made an extraordinary journey, together we realized many initiatives which made us grow in the world». Menarini Group is the title sponsor of the Award and, since 9 years, links its name to the same ethical values of fair play promoted by the event. «The XXV edition of the International Fair Play – Menarini Award will also be an occasion to acknowledge, through the positive values of sport, the enormous effort the healthcare professionals, researchers and all those who are on the front line are making to defeat this terrible pandemic», said Ennio Troiano, Director Global Human Resources Menarini. «In this historical moment of starting over, we hope that the values of fair play may guide us in facing other such challenges in the future».

Main topic of the year is the new category “Model for the Younger Generation”, a special award dedicated to the memory of champion footballer Paolo Rossi. «We remember Paolo Rossi not only with his surname, as we usually do with athletes, but by adding his first name», pointed out Ennio Troiano. «This is because, in a country which tried to rise from years of extremism, difficulties and great social conflicts, he was able to put all the Italians together in one hope: winning is possible together, even winning a world championship». […] Football legends such as Maradona, Socrates and many other champions seemed unattainable. And yet, 12- or 13-year-old boys like I was at the time learned that these challenges can also be won, and we learned it also thanks to Paolo Rossi. […] The award named after him is a model for the younger generation, therefore, is probably the most important award».
The deserved recognition to this football star was introduced by the event committee together with Paolo Rossi’s wife Federica Cappelletti, and will be conferred to two top ranking sportsmen from the football world: Marco Tardelli and Hans-Peter Müller. The world of soccer will also be represented by coach Siniša Mihajlović, the coach of the San Marino National Team Massimo Bonini; Dutch footballer Patrick Stephan Kluivert; young forward in Naples WOSO Eleonora Maria Goldoni and former referee Pierluigi Collina. Other sports legends will be awarded, such as Swedish coach and former tennis player Stefan Edberg, boxer Patrizio Oliva (also known as “Sparrow hawk”), former basketball player in Cantù Team Pierluigi Marzorati, coach and former Arezzo judoka Matteo Marconcini, Hungarian record holding swimmer Katinka Hosszú and the yachtsman and former rower Romano Battisti.
The special prize in memory of Franco Lauro, category “Narrating the emotions” will be awarded to the Mediaset sports journalist, Lucia Blini.
The Sports Center “Fiamme Gialle” reconfirms also in this edition the category “Study and sport”. The prize will be awarded to the female student of Arezzo who will achieve the best agnostic results together with excellent schoolwork.

The XXV Edition of the International Fair Play – Menarini Award will take place in three days and it will start on Monday, August 30th in Castiglion Fiorentino with a football match in memory of Fabrizio Meoni and his daughter Chiara, who passed away at the age of 18. Former footballers and cyclists will take the field together with the National Federation of Nurses, the proceeds from the charity match will be used mainly for research. The match will also be followed by the talk show “The champions talk of themselves”.

On Tuesday, August 31st, the Gala-Dinner – organized by the title sponsor Menarini – will take place in the magical setting of Piazzale Michelangelo in Florence.

The last day, Wednesday, September 1st, the exciting Awards Ceremony will be staged in the picturesque Town Hall Square in Castiglion Fiorentino. The announcers will be once again Lorenzo Dallari and Rachele Sangiuliano, the ceremony will be also broadcast live at 20:30 on Sportitalia, media partner of the event. «We are proud to host for the ninth consecutive year the International Fair Play Menarini Award», said Mario Agnelli, mayor of Castiglion Fiorentino. «This event is the standard-bearer of sound principles which last in time and allow us to look to the future. The ideals of fair play have allowed Castiglion Fiorentino to grow as a community, becoming ambassador of those principles of ethics and respect that should become unwritten rules to always follow, both in sport and in daily life».

During the press conference, the words of the former female hammer thrower Silvia Salis, Deputy Vice President of the Italian National Olympic Committee (CONI) – always at the side of this award – praised the Italian athletes and pointed out the importance of fair play, both in winning and losing: «Italian sport is now experiencing an exciting moment which allowed us to understand how fair play has a fundamental role not only in the process of accepting defeats, but also in the management of victories. […] What does “fair play” mean when you win? It means that your opponent allowed you to realize your dream through a fair competition, thanks to his presence, his commitment, and aiming at your own goal. We saw our Italian tennis player Matteo Berrettini, playing for a special final. Matteo has shown himself to be respectful, determined, but at the same time he accepted the defeat, which does not mean being passive about what happens, but it means knowing how to manage your mood and your will in difficult moments. An athlete spends his whole life training for a day, ahead of a final. If that day does not go as he would have expected, it may be a really hard disappointment for him to accept. […] Fair play is a seed that the International Fair Play – Menarini Award, just like the Olympic Committee, has always tried to sow and cultivate especially in an educational perspective towards the younger generation».

This is what Menarini wants to convey: a dream becoming true through great sportsmen, a burst of optimism, being able to create something better together and to succeed – all of us – in respecting the rules and being ethical towards the world.