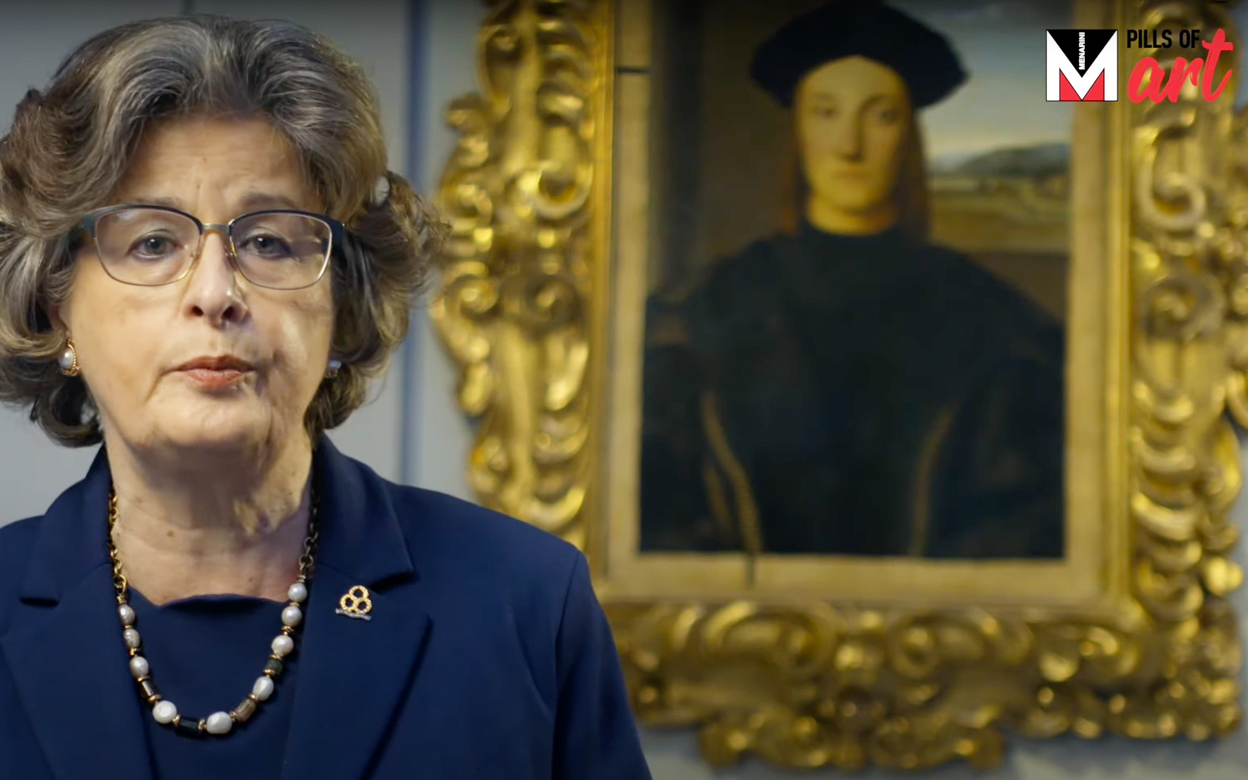 Raffaello Sanzio is one of the undisputed geniuses of the Renaissance: he was an extraordinarily talented painter, an innovative architect and a patron of the ancient arts, even going so far as being appointed “Prefect for the Antiquities” by the Pope himself.

For these reasons, the Menarini Group released a monograph about Raphael, written by Italian art historian Cristina Acidini for the historic Menarini Art Volumes series. Three videos of the Menarini Pills of Art project will lead you to discover some of the most famous portraits of this incredible Renaissance artist.

Art historian Cristina Acidini, author of the recent Menarini Art Volume on Raphael, leads us to discover the portrait of Guidobaldo da Montefeltro, a work whose attribution to Raphael was uncertain for a long time.

The portrait depicts Guidobaldo da Montefeltro, the last descendant of the Montefeltro dynasty and Duke of Urbino, Raphael’s hometown. Raphael’s father, Giovanni Santi, had been a poet and painter at the court of Urbino, and Raphael himself never lost contact with the Dukes of Urbino, although his brilliant career had taken him to travel to Perugia, Florence, Siena and Rome. Raphael painted the portrait around 1506 during a stay in his hometown, forming a diptych with the portrait of Elisabetta Gonzaga.

The painting, in oil on panel, is preserved in the Uffizi Gallery and arrived in Florence in 1631 as part of the dowry of Vittoria della Rovere, who was to marry Grand Duke Ferdinando II de’ Medici.

The young duke in his thirties is immortalised half length, in a frontal, austere pose that is almost hieratic, to convey the gravitas of the noble family. Guidobaldo’s attire is also austere and elegant, almost entirely black, emphasising his pale face with regular features. The duke wears a black cloth beret, a black joust closed at the neck and a black velvet robe with wide sleeves, also black, but embellished with a golden chequered pattern, representing a heraldic allusion to the colours of the Montefeltro family.

An open window behind Duke Guidobaldo looks out onto a bucolic landscape reminiscent of the Umbrian hills, with farmhouses, hay sheaves, woods, a small lake and a road guiding the eye to the walled city in the background.

Portrait of a woman known as ‘La Velata’

Florentine art expert Giovanni Matteo Guidetti uncovers the wonders of Raphael’s ‘La Velata’ (meaning woman with a veil). This painting, which takes its name from the veil worn by the young woman depicted in it, was painted between 1512 and 1515 in oil on canvas and is considered one of the absolute masterpieces of Raphael’s portrait art.

A lady is portrayed half-length against a dark background. The necklace and pendant of precious stones ending in a pearl symbolise the high social status of the woman. In addition, the exquisite pendant suggests an engagement or wedding present and highlights the dark curl that has escaped from the young lady’s neatly arranged hairstyle.

But above all, the painting is dominated by her magnificent dress, in which the white marbled silk of the puffed sleeve creates plays of light and reflections of incredible chromatic harmony with the golden embroidery, to the point that art historian Ettore Camesasca declared that the painting seems to be ‘the portrait of a sleeve‘.

Vasari speculated that the young woman portrayed was Margherita Luti, also known as ‘La Fornarina’, a favourite of Raphael and also depicted in other of his works. However, the elegant richness of the clothes and jewellery worn by the lady and, above all, the presence of the veil that gives the painting its title, suggest that the subject was an anonymous married noblewoman, since the veil was the prerogative of married women with children.

Florentine art expert Bernardo Randelli explains the details of one of Raphael’s most famous works: the portrait of Agnolo Doni, a cloth merchant and art collector, who hired the painter to portray him and his wife, Maddalena Strozzi, in a sort of conceptual diptych.

Although depicted turned three-quarters, Agnolo Doni’s gaze is turned towards the viewer: his eyes are at once proud and serene, denoting the natural calmness of his character. Numerous details symbolise his social status as a wealthy bourgeois merchant: the rings on his hands, the black velvet corset and the elegant white shirt peeking out from under it, the robe with wide red cloth sleeves that adds a splash of colour to the composition, which will be balanced by the blue sleeves of the portrait of Maddalena Strozzi.

The face of the protagonist is still the main focus of the painting. His elegant and relaxed posture seems to be accompanied by the landscape in the background, with hills gently sloping from left to right following the line of his shoulders. The two clouds at Agnolo Doni’s sides fill the empty spaces in the sky, giving the composition a balance that takes on a symbolic nature, reflecting the protagonist’s inner balance.

Adoration of the Magi by Sandro Botticelli