Here we are once again for what has become our customary lesson on research.
In the last edition, we took a look at the long journey a molecule must take to become a drug, focusing on the first step: Discovery. Now, let’s take a step forward and look at the second stage of development, dedicated to the pharmacological preclinical studies to determine the properties  of the molecules selected during the Discovery phase. 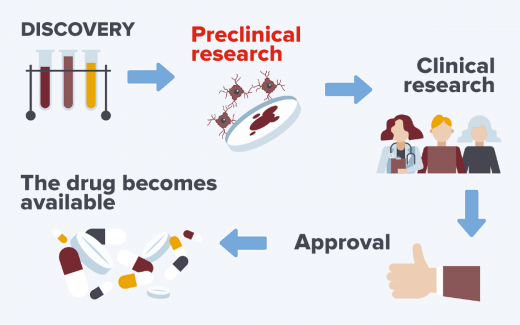 As the name suggests, this second phase must precede any clinical studies and is of vital importance in analysing different aspects of the “candidate” drug, such as its mechanism of action (how it acts to produce the therapeutic effect) and its power (its ability to produce that effect), along with many other features which contribute to it being considered a potential drug.

These  assessments are possible thanks to the use of experimental models – with biological and clinical relevance – to validate molecular targets in the context of the disease. Ex-vivo models are an example of this: they involve the use of cells or tissues taken from patients and cultivated in the laboratory under suitable sterile conditions. The importance of these models lies in the fact that they provide researchers with a valuable tool to better understand the action of the drug before it is used in humans; so that, only the most active drugs go on to the following phases of development, thus reducing the risk of failure in later stages. In fact, it is not uncommon for some compounds to be judged unsuitable to continue during the course of preclinical studies, this due to their lack of effectiveness or high toxicity levels.

Another aim of preclinical studies is to identify biomarkers, in other words indicators of disease process or of a biological response to the treatment being assessed. Variations

in a given marker (for example, the levels of a certain protein) may be connected to the risk level or progression of a disease or to the disease’s vulnerability to a certain treatment. The detection of these markers enables to select the patient population who will benefit most from the use of the drug in the clinical investigation.

After examining the mechanism of action and studying the pharmacological activity of the new molecule, further assessments evaluate its safety profile. At this point, the molecule may be deemed suitable (or unsuitable) for the next phase, but this will not happen before the appropriate dosage for first use in humans, formulation and its method of administration are established.

The Value of research in fighting Leukemia: Menarini’s commitment to developing new therapies

Journey into the world of research and development of new medicines