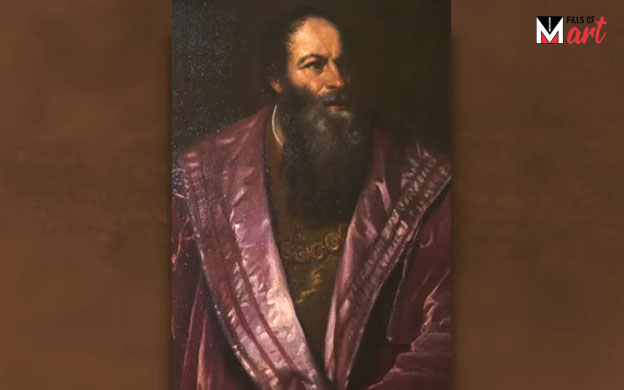 We are in the Palatine Gallery of Palazzo Pitti in Florence, where Oliviera Stojovic introduces to us one of Titian’s masterpieces: the Portrait of Pietro Aretino.

The painting is the demonstration of one of the most famous partnerships between a man of letters and a painter: the commissioner, Pietro Aretino, one of the most acute and brilliant intellectuals of 16th century in Italy, and Tiziano Vecellio – usually known as Titian – the greatest exponent of Venetian painting.

Thanks to Aretino, Titian will make contact with the most important Italian and European courts, becoming el pintor primero (i.e. the official painter) of Emperor Charles V, King of Spain.

The portrait – called “scourge of princes” by Ariosto – tells a lot about its protagonist, Aretino. The writer was highly esteemed by the princes of the Renaissance, but he was also much feared for his irreverent and mordant writings, often related to the painters’ works and – especially – to the life at court, showing its contradictions and meanness.

Titian also painted other portraits of Aretino, but the one preserved in Palazzo Pitti is considered the sole in which the artist grasped effectively the intellectual and moral qualities of the writer’s temperament.

The painter portrays Aretino as a proud man, in three-quarter posture, his intense and inquiring gaze is turned towards the viewer; his massive body, wrapped in a sumptuous red coat, and the gold chain around his neck reveal his well-off conditions. Although the rapid brushstrokes, the folds of the precious coat stand out, illuminated by free brushstrokes that give to the figure a real physicality. This is a perfect example of Venetian colorism technique.

Also on this occasion, Aretino – albeit in a friendly tone – could not avoid to express his displeasure with the sketched technique that Titian had used in his portrait, painted in Venice before leaving for Rome. In September 1545 the writer donated the painting to Duke Cosimo I de’ Medici and, in a letter addressed to him, he said that perhaps if he had paid the painter more, the result would have been better, more polished and softer.