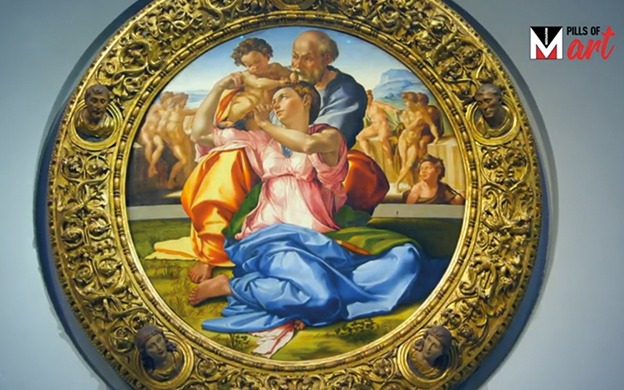 Florence, Uffizi Gallery.
Here we meet Bernardo Randelli, expert in Florentine Art, who guides us to discover one of the most beautiful and revolutionary paintings by Michelangiolo Buonarroti: Doni Tondo.

We are in the middle of the Renaissance, incredibly flourishing epoch for art and culture. In this period of maximum splendor are active in Florence – as well as Michelangiolo Buonarroti, usually known as Michelangelo – men like Leonardo and Raphael.

The original title of this painting is Holy Family with San Giovannino, but is more commonly known as Doni Tondo, because of its circular shape and for the name of Agnolo Doni, a rich Florentine merchant who commissioned the paint to commemorate his marriage with Maddalena Strozzi in 1503-1504. The same Uffizi room that houses the Doni Tondo, also houses the portraits of Doni and his bride Maddalena painted by Raphael in 1505-1506.

The artwork, round in shape, presents a style in vogue for the furnishings of the epoch and its structure highlights the strong passion of Michelangelo for Sculptural Art. The subjects, in fact, are imposing themselves majestically, as in his previous marble reliefs Pitti Tondo (1503-04) and Taddei Tondo (1504-06). The Doni Tondo is believed to be the only existing panel picture painted by Michelangelo without the aid of assistants.

The study of the human being is at the center of Michelangelo’s art and reflections, and this artwork is proof of this. The subjects are privated of their sacred appearance: Maria, represented with a muscular and partly masculine body, has a book on her legs; she turns ready to welcome her child, who is playing with the locks of her hair; Jesus is gently brought to her by Joseph, kneeling behind her. Therefore, they are not represented as Holy Family, but simply as a father and a mother with their child.

The dynamism in this piece of art is breathtaking, the subjects seems to come to life at any moment: the figures in the foreground are spiralling upwards, in contrast with the horizontality of the subjects in the background, which are resting, seated and well anchored to a small wall.

The lines and volumes of the bodies are another evident sign of Michelangelo’s passion for sculpture: the subjects present voluminous and plastic forms, humanized to the point that we can see Mary’s biceps and the masculine shape of her body under the spectacular pink vest. The five nude male figures in the background, intended as a symbol of pagan humanity, contrast the Holy Family in the foreground, which summarizes Christianity.

One of the most accredited readings of Doni Tondo considers the figure of San Giovannino – leaning over the wall, separating the Holy Family from the five nude figures – as a link between the pagan world and the Christian world. The completion of the artwork – shortly after the baptism of Doni’s eldest daughter, Maria (1506) – explains the presence of the young John the Baptist (San Giovannino) in the middle of the paint. The five nudes are probably a tribute to the Greek Art, whose voluminous and dynamic forms Michelangelo loved so much. The artist was presumably inspired by the hellenistic statue Laocoön and His Sons (found in 1506 near the Domus Aurea of Nero), there are in fact strong similarities with the figure of Joseph.

The frame of the Doni Tondo was designed by Michelangelo and realized by Francesco del Tasso, one of the greatest carvers at that time. Represented on the frame are the head of Christ and those of four prophets, surrounded by fine floral decorations; at the top left, four half-moons are visible, symbol of the Strozzi family.

In this artwork the artist manages to combine the sculptural, voluminous and plastic forms of the bodies with the delicacy and softness of the movements; moreover, he subtracts the figures of Mary, Joseph and Jesus from the traditional sacred context, showing them human, true, alive, without losing their solemnity.

The Holy Family is much larger to us, the viewers, than the nudes in the background, a device to aid the illusion of deep space in a two-dimensional image. The point of view chosen by the artist to represent the nudes is frontal and lowered, unlike what the artist adopts for the central group, seen from below. With this shocking overcoming of the perspective of fifteenth-century art, Michelangelo marks the beginning of Mannerism.