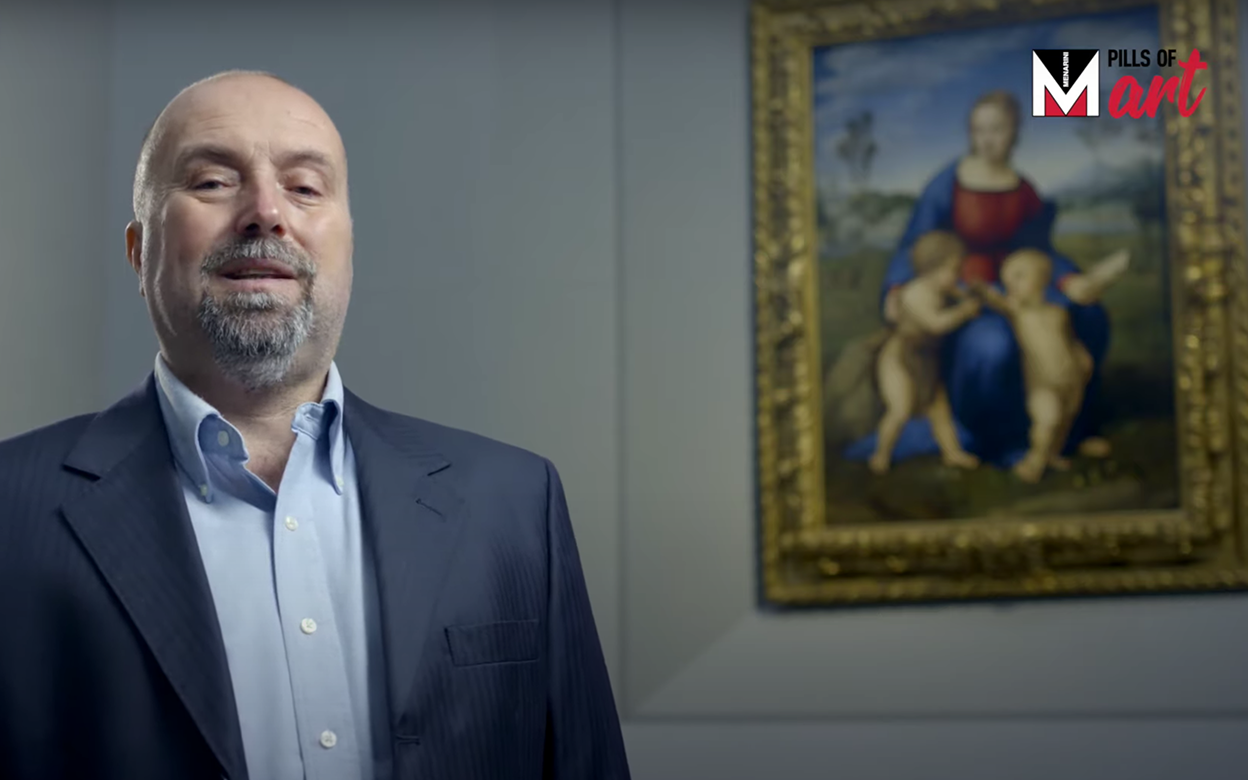 Florence has the privilege of preserving the largest number of paintings by Raphael in the world. The art expert Bernardo Randelli guides us through the Uffizi Galleries to discover one of the most famous Raphael’s works marked by an ideal harmonious beauty and perfect in its simplicity: Mary, Christ and the young John the Baptist, also known as Madonna of the Goldfinch.

The artwork and Florentine influences

This Raphael’s masterpiece is an oil painting made on wooden panel (107 x 77,2 cm), commissioned by the rich Florentine merchant Lorenzo Nasi for his wedding. Completed by February 1506 the panel was made during the artist’s stay in Florence, between 1504 and 1508.

The artwork shows the love of a mother and presages the death on the cross of her son, the goldfinch – with his head stained with red – is precisely a symbol of the passion of Christ.

In the foreground is the Virgin wearing the traditional red dress, symbol of passion, and a dark blue cloak, symbol of the Church. Between her knees is the Child Jesus, who leans his naked little foot on that of the barefoot Mother, as if to seek protection, and reaches out his hand to the goldfinch, brought to him by Saint John, who is leaning to the right leg of Mary.

With an affectionate and protective gesture, the Virgin placed her right hand on Saint John’s shoulder and observed him, turning her eyes downwards; while, with her left hand, she is helding a small sacred text, which is a sign of her faith and the prefiguration of Christ’s sacrifice. The sacrifice is also evoked by the innocent fragility of the goldfinch, who tried to relieve the pain of Jesus on the cross by extracting the thorns with his beak: his plumage still bears the traces of the blood of Christ.

The figures are placed in a hilly landscape full of a pregnant and quiet force, dominated by green and blue colors. The clouds open at the top right, in the direction of Mary’s head. The light hits the figures from above, it is not particularly intense and seems to spread a brightness that also lightens the bodies’ shadows. The viewer is induced to linger on the horizon, on the watercourse and on the city – Florence, apparently – while the Virgin holds the Book in her hand, where she reads what is already written.

Raphael combines the gentle harmony of Perugino’s landscapes – his first mentor – with the most recent Florentine inspirations. The landscape is in fact wisely built, with a progression of natural backdrops. The depth is achieved by the perspective of size, which is evident thanks to the presence of the trees and the houses in the background, and the bridge on the left. Particularly effective in creating depth is also the aerial perspective, clearly derived from Leonardo. Here, the sfumato is used to dissolve the landscape on the horizon in the atmosphere, and is also helping to make the intense exchange of looks and gestures that bind the figures more natural, enhancing the graceful variety of their expressions.

The pyramidal structure of the composition reflects the deep impression made on Raphael by the lost cartoon for the Virgin and Child with St Anne by Leonardo, as well as the Madonna of Bruges by Michelangelo, sculpted before summer 1506.

The artist seems to be influenced by Leonardo also with the addition of San Giovannino, as can be seen from the group of Madonnas with Child represented by Raphael between 1506 and 1507. However, in his Madonnas he seems to simplify Leonardo’s schemes, excluding any effect of disturbing tension and getting an intimate representation – almost affectionate – of the scene, in which everything speaks a soothing and calm language.

By studying the laws of proportion in nature and in the works of Perugino, Fra’ Bartolomeo and Leonardo, Raphael was able to create images of an ideal beauty, but also vital and dynamic.

According to the historian Giorgio Vasari, the painting was involved – just forty years after its creation – in the collapse of the palace where it was located and overwhelmed by rubble. On 12 November 1547, in fact, Nasi Palace crumbled due to a landslide. The panel was recovered in 17 pieces.

An inscription in Via de’ Bardi in Florence – still readable today – reports the prohibition by Cosimo de’ Medici to rebuild in that area, where at that time buildings had repeatedly collapsed.

In his The Lives of the Most Excellent Painters, Sculptors, and Architects, Vasari tells that «found the pieces [of the panel] among the rubble of ruin were by Battista [Nasi] son of Lorenzo, loving art, put together in the best way possible». On that occasion, about 20% of the original panel was lost and probably Ridolfo del Ghirlandaio – a friend of Raphael – was the author of the first restoration. Raphael had already died long ago, aged only 37, in 1520.

Following the first intervention, traces of several other remakes have been found.
This work has recently “re-flourished”, after a long restoration carried out at the dawn of 2000.

The figure of Raphael takes on a special aura – as an artist and as a man – for the prestige he quickly achieved.

Raffaello Sanzio was born in Urbino, in 1483. His father, Giovanni Santi – a cultured artist-humanist with literary and theatre experiences, and painter at the head of a thriving workshop – introduced the son to painting at an early age. Raphael’s apprenticeship in the workshop of Perugino is usually dated after his father died, in 1494. Vasari argues that initially it was not possible to distinguish the works by Raphael from those made by Pietro Perugino.

The cultural basis of the artist has roots in his family context, as well as in his formation was decisive the fact that Raphael was born and spent his youth in the town of Urbino, which in that period was an artistic center of primary importance: in Italy and Europe, Urbino radiated the ideals of the Renaissance.

Historiography has always been in agreement in recognizing in Raphael the emblematic representative of the Renaissance painting. He was able to convey the ideals of formal perfection, aristocratic finesse and total harmony considered the ultimate goal of all artists of that period.

Raphael guides our perception inside the artwork and leads us physically to the relationship between the elements that compose it. Thus, moving our emotions.

A masterpiece like the Madonna of the Goldfinch has its own existence that overcomes the barrier of time, speaking for centuries.