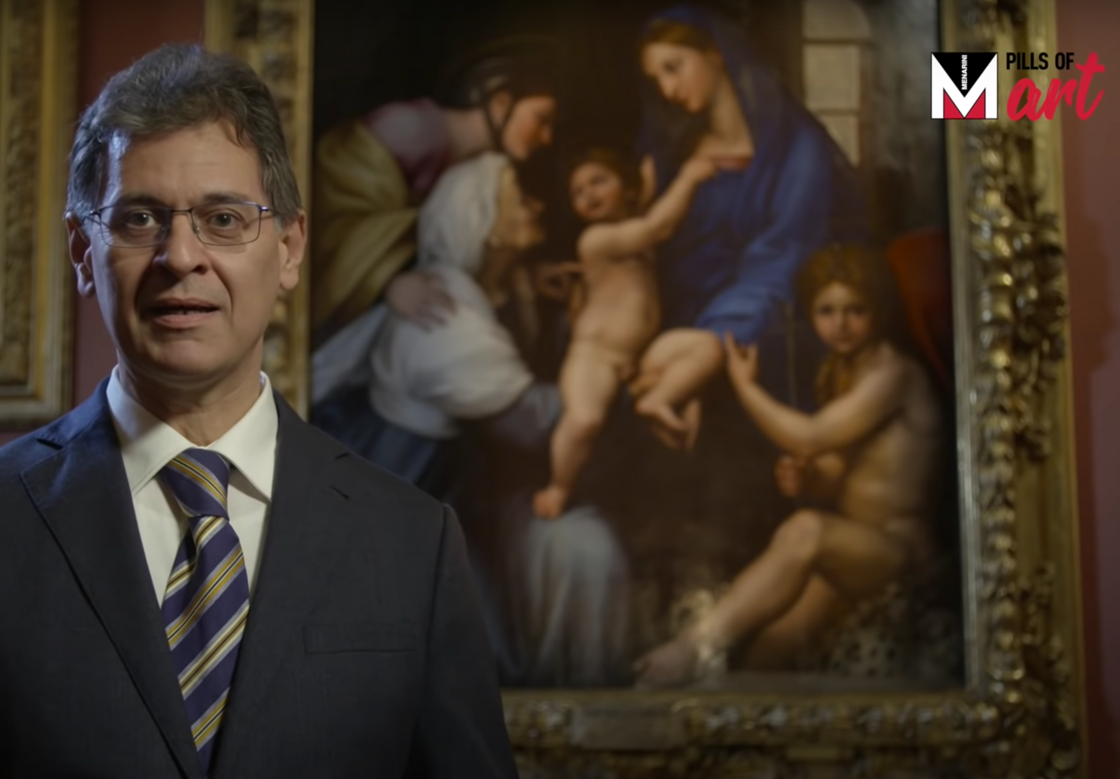 We are in the Palatine Gallery of Palazzo Pitti in Florence accompanied by Giovanni Matteo Guidetti to admire a work of Raphael’s maturity: Madonna Dell’Impannata.

This piece of art takes its name from a detail in the background: the “paned” window, so called because a cloth was attached to its frame, a typical protection for dwellings at that time. The adjective “paned” in Italian would be precisely impannata.

The scene is familiar and intimate, it represents the holy family in an interior. In the center of the painting, the Madonna hands her son to the elderly Saint Elizabeth, kneeling before her. The little Child Jesus, stretched out towards the old woman with the lower part of his body, looks ludic at Saint Catherine, while she fondles him with a finger. All the gestures, looks and movements of the women are directed towards the central figure of the Child Jesus.

In the foreground, detached from this circle of looks and gestures, is represented St. John the Baptist. He is gazing at the viewer, as if he wants to invite him/her to watch the scene, indicated by his left arm. His left leg is also projected towards us – towards the viewer – and it seems that the invisible window, which separates us from this Raphael’s masterpiece, can be raised and broken at any moment.

The oil painting on canvas, was commissioned to Raphael in Rome after 1511 by the Florentine banker Bindo Altoviti. A beautiful portrait of the above-mentioned commissioner, also painted by Raphael, is preserved in the Washington National Gallery of Arts.

The work, intended for the Altoviti’s florentine residence, was among the assets confiscated from the banker because of his anti-Medici position. Around 1550 Cosimo I de’ Medici embeded the painting in the ducal collections; then later, during the Napoleonic occupation in 1799, it was transferred to Paris and brought back to Italy only in 1815.

When Raphael painted this masterpiece he was at the height of his artistic maturity, and meanwhile he was also working at the Vatican Rooms. In fact, in the harmonious movements of the gently intertwined bodies – as well as in the intense glances, which allow us to imagine a secret dialogue between women – Raphael seems to pay homage to Leonardo da Vinci.