Menarini Pills of Art: Crucifixion with Saints by Fra’ Angelico 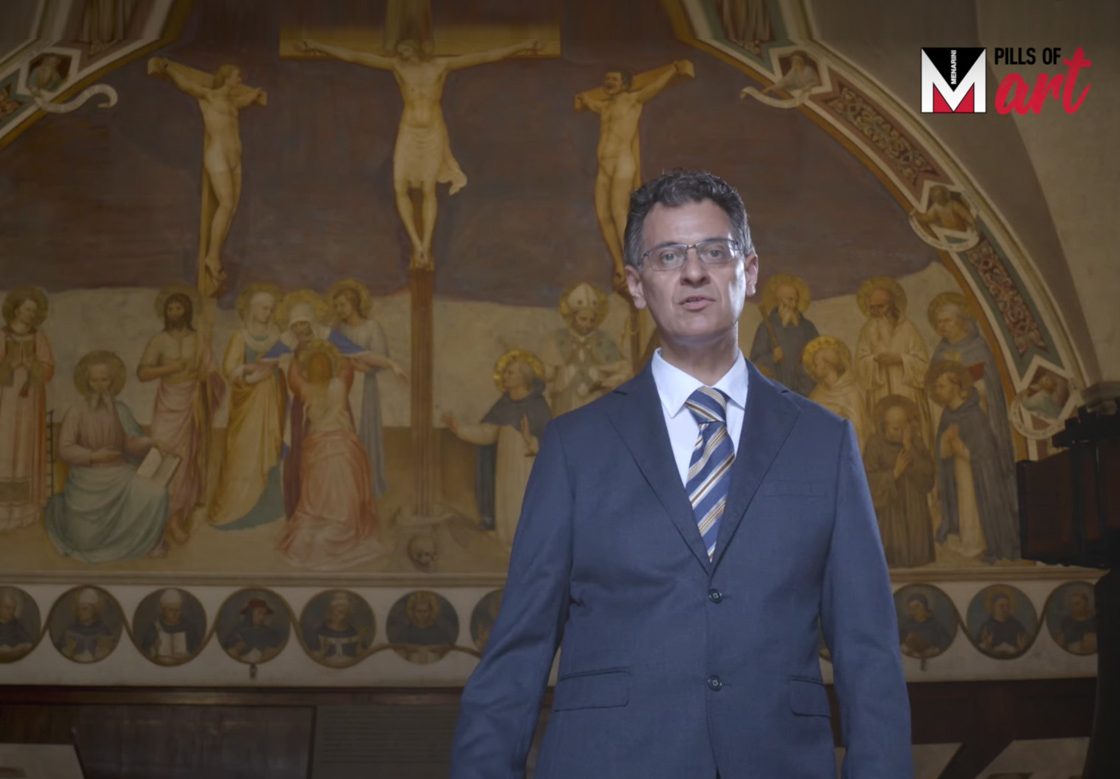 We are in the National Museum housed in the monumental section of the medieval Dominican friary dedicated to St Mark, situated on the present-day Piazza San Marco, in Florence.

The fresco painted by Fra’ Angelico measures 550×950 cm and is located in the upper part of the North wall, inside a large lunette. Giovanni Matteo Guidetti introduces to us this mystical and peculiar art work.

Dating back to the 13th century, the monastery was decorated by Fra’ Angelico at the specific request of Cosimo de’ Medici and his expense: the corridors, the cloister, the Chapter Hall and the cells for the friars were built between 1438 and 1450.

The fresco we are talking about was made between 1441 and 1442 and is located in the Chapter Hall, where the monks used to meet several times during the day. It is the largest, most majestic and most elaborate fresco that Fra’ Angelico has made in San Marco.

The art work represents a fundamental moment of the Passion of Christ, showing different touches of originality and a delicate attention to detail.

The cross of Christ dominates the center of the scene, dividing it into exactly two parts. The arrangement of the figures is aligned on the front plane of the painting, only the crosses of the two thieves are arranged on the middleground, with diagonal inclination.

In the background, a barren landscape suggests the viewer to focus on the characters, all caught in gestures of deep devotion.

The work is not conceived with narrative intent: Fra’ Angelico, in fact, combines iconic figures – linked to the sacredness of the scene – with other allegorical ones.

Under the cross we find characters traditionally connected to the history of the crucifixion: Saint John the Evangelist is holding the arm of the suffering and almost senseless Madonna, who is also supported by Mary of Cleophas and Mary Magdalene.

In this artwork, the representation of emotions is not disruptive. The figures are portrayed with a combination of different poses and delicate detail: the abandoned hands of the Virgin Mary, the tear on the face of Mary of Cleophas and the sad gaze of Saint John the Evangelist.
Moreover, Mary Magdalene – behind the viewer – presents a small perspective anomaly: her halo is in front of and not behind her. This choice was made by Fra’ Angelico not to interrupt the dramatic effect created by the body of the woman.

The other characters of the paint have nothing to do with the historical bystanders of the event, they are rather linked to the symbology of Salvation. And this is indeed the most particular aspect of representation.

On the right there are eleven figures representing the founders of the most important orders of the Catholic Church. The first figure on the left, kneeling at the foot of the cross, is Saint Dominic, founder of the Dominicans; followed by the founder of the Hieronymites, Saint Jerome, recognizable by the cardinal hat laid in front of him; Saint Francis of Assisi, founder of the Order of Friars Minor; Saint Bernard, on his Rules the Order of Cistercians is based; Saint John Gualbert, founder of the Vallumbrosan Order and the Dominican friar Saint Peter of Verona. Behind this group of kneeling Saints, we find standing, starting from the left, Saint Augustine, founder of the Augustinians and his mentor Saint Ambrose (or Saint Zenobius, bishop of Florence, there are several theories on the identity of this saint); Saint Benedict of Nursia, founder of the Benedictines; Saint Romuald, founder of the Camaldolese congregations and the Dominican theologian Saint Thomas Aquinas. The presence of these figures is not casual and responds to a specific devotional function, which is also evident in the other frescoes by Fra’ Angelico in the monastery.

On the left side we find the five patron saints: the kneeling Saint Mark, to whom the convent is dedicated; Saint John the Baptist, patron saint of the city of Florence; Saint Lawrence, holder of the church that houses the Medici Chapels; finally, Saints Cosmas and Damian, chosen by the House of Medici as holy protectors of the family. Their gestures of the characters are full of meaning: St Mark shows the Gospel he wrote, while St John points to the cross of Jesus.

From the chromatic point of view, it is interesting to note how Fra’ Angelico builds a landscape whose colours – starting from the left – gradually fade away. The sky was designed to be darker at the top and lighter at the bottom; however, we see now reddish shades, since the pigment initially used (azurite) has peeled, showing the groundwork below.

The art work is densely populated by detailed figures: in the lower border is represented the Dominican genealogy, composed of seventeen figures (among popes, cardinals, bishops, saints and blesseds); on the upper frame instead are depicted ten inserts of Prophets and Sibyls, at the center is the allegorical figure of the pelican feeding its babies with its own flesh, symbol of charity and love of neighbour.

The greatness of Fra’ Angelico is also evident from the technique he used in this work, which brings together the new pictorial principles of the Renaissance, such as: the perspective construction, the attention to the human figure and the ancient medieval values, the didactic function of art and the mystical value of light.

The calmness of the figures, their positions laid down but alive and the delicate colors of their coats, make this fresco – as well as other works of the monastery – a painted prayer.