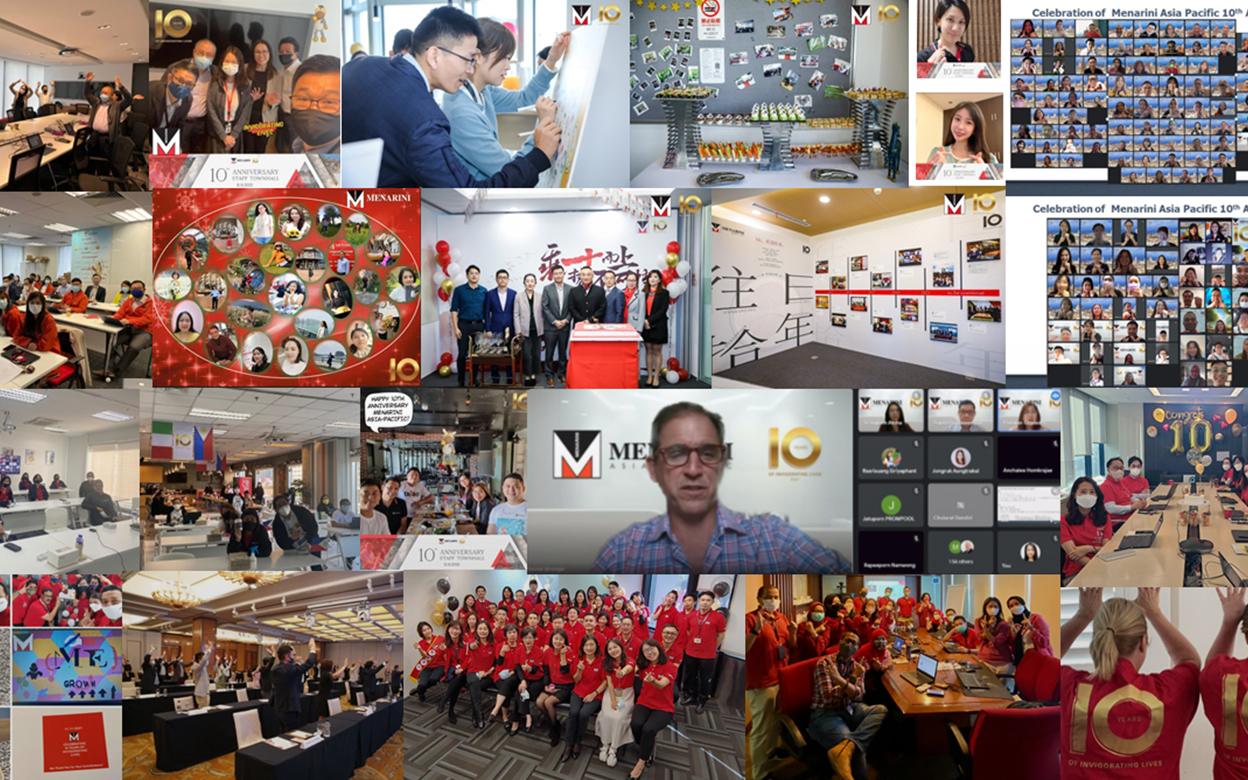 Founded in 1886, the Menarini Group is Italy’s largest pharmaceutical company, with over 17,000 employees worldwide, a consolidated turnover of almost 4 billion euros in 2020 and a great number of strategically located offices in various parts of the world that act as a reference point for the surrounding markets.

Among these, Menarini’s Asia-Pacific division is one of the fastest growing of the entire Group. Menarini’s presence in Asia is rather significant: from South Korea to the Philippines, from China to India, there are numerous countries across the region that benefit from the presence of the Italian pharmaceutical company.

Menarini Asia-Pacific recently celebrated its 10 Year Anniversary, an important milestone in the history of this division which saw its debut when Menarini Group acquired Invida Group, a Singapore registered company which was also Menarini’s main distributor in the Philippines.
On 11 November 2011 Menarini acquired a direct presence in 13 major healthcare markets and immediately established its regional office in Singapore.
This bold and visionary move, aimed at accelerating Menarini’s growth within Asia, has paid off: Menarini Asia-Pacific’s 10 years of activity have been rich in successes and new achievements.

In particular, partnerships are a cornerstone of Menarini AP’s business: since 2011, the Asiatic division has forged 50 partnerships with some of the world’s pharmaceutical giants.
Today, Menarini Asia-Pacific’s portfolio includes more than 350 brands across 10 different therapeutic areas.

In the words of Maurizio Luongo, CEO of Menarini Asia-Pacific, “Menarini Asia-Pacific is the European pharmaceutical company of choice that HCPs, patients and consumers across the region recognise as a trusted name in healthcare.
From consumer healthcare to primary care and specialty care brands across an array of key therapeutics areas that concern billions around the region, Menarini Asia-Pacific’s employees and products seek to invigorate lives in every way. We will press on to grow our presence in the next decade and advance our mission throughout the Asia Pacific and beyond.”

Menarini Asia-Pacific looks to the future

The Menarini Asia-Pacific division does not plan to stop at its achievements to date; instead, it plans on building on its achievements and on growing its footprint across Asia Pacific. Its future plans cover several points of significant importance.

In particular, Menarini AP plans to further invest in strategic partnerships and acquisitions, to enhance its manufacturing capabilities (by opening a new tableting facility in Indonesia in 2023), to invest in Research & Development with a new research laboratory in Singapore that will become a cell-based, non-invasive prenatal diagnosis hub.
Further goals also include enhancing Menarini AP’s portfolio, with a particular focus on oncology innovative assets, and growing Menarini Asia-Pacific’s influence in Digital Health and E-Commerce across both prescriptive and non-prescriptive products.

On 11 November 2021, celebrations were held in all Menarini Asia-Pacific offices.
In addition, Menarini AP employees from all over the region tuned in to the 10th Anniversary Staff Townhall, during which they were able to delve into the history of Menarini Asia-Pacific, celebrate the achievements of its first decade of activity and mark the beginning of a new future together.

The programme offered two different avenues to uplift the less fortunate: sponsoring 25 children from Antique, Philippines through World Vision, and donating to the Water Improvement Project in Ende, Indonesia.
By the end of the event, all children were taken up for sponsorship and $2,620 had been raised towards the Water Improvement Project. Combined with Menarini Asia-Pacific’s $50,000 contribution as an organisation, the total funds raised reached $66,660.

One of the highlights of the event were the speeches by Lucia and Alberto Giovanni Aleotti, members of the Menarini board, who encouraged participants to “not be afraid of running, learning, listening and be open to new things”, and the speech by Elcin Barker-Elgun, CEO of the Menarini Group, who talked about the future of the Group.

Wrapping up the event was the music video of the song “Invigorating Lives”, which was written and recorded by Menarini employees themselves in celebration of Menarini Asia-Pacific’s 10th Anniversary.

The song was composed by Desmond Ho from the Hong Kong office and CY Lim from the Regional Office, and a song writing competition was held to celebrate Menarini AP’s important milestone: the month-long contest beginning in July 2021 attracted participation from nine markets with 29 song submissions. The song “Invigorating Lives” was inspired by the real experiences of Menarini Asia-Pacific’s workers, perfectly embodying the identity and values that bind Menarini employees in their constant commitment to improving the lives of others. It was a touching moment that gave all participants the opportunity to reflect on a memorable 10 years spent together.