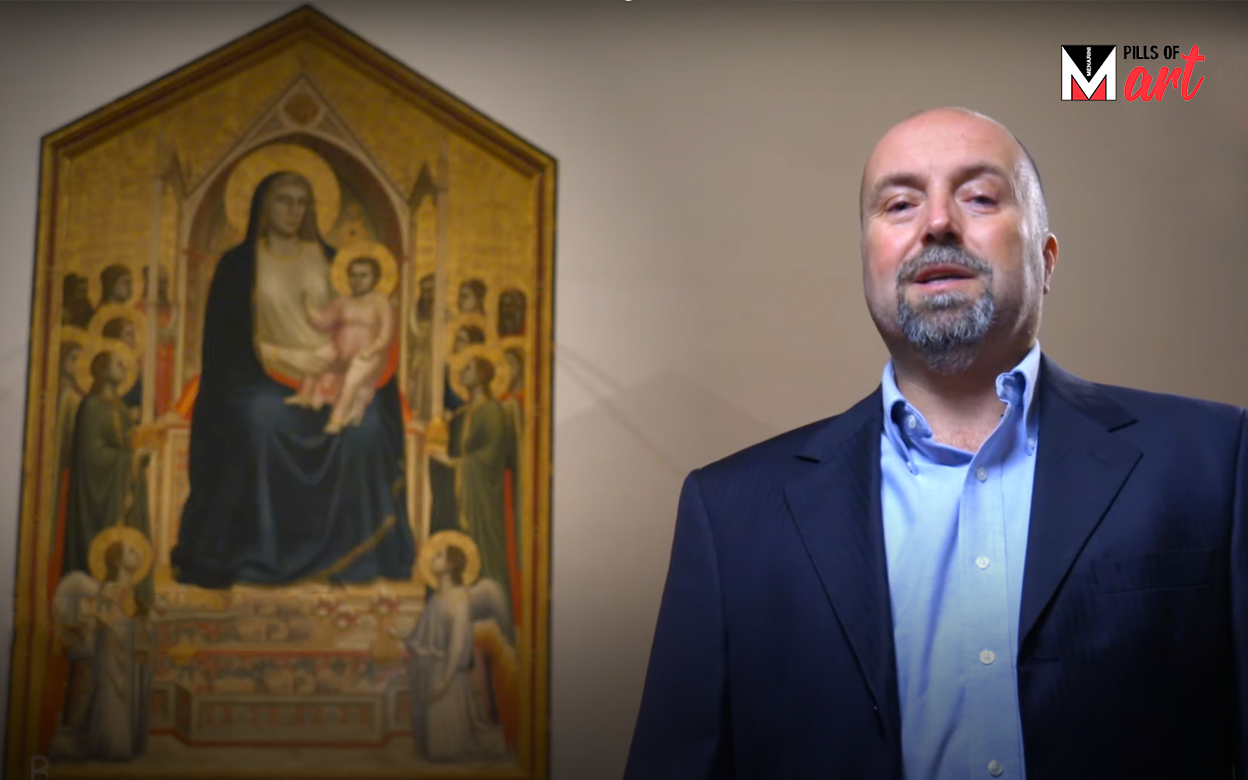 One of the most famous rooms in the renowned Uffizi Gallery Museum in Florence is Room number 2, dedicated to the 13th century and Giotto. Stepping into this room is an evocative experience, which sheds insight on Italian art in the late 13th and early 14th centuries: a journey through Italian pictorial art starting from its very origins.
In this room, art expert Bernardo Randelli guides us on a discovery of a masterpiece of Medieval Italian art, a work that served as an inspiration for Florentine painters for over a century: the Madonna and Child, better known as the Maestà Ognissanti.

The sacred tradition in an innovative artwork

The painting dates back to around 1300 – 1305 and is named after the Church of Ognissanti in Florence, where it was originally located. Like all altarpieces, its dimensions are rather large (3.25 x 2.04 m), and the painting technique is tempera on panel, which was typical of that period. It is not known with certainty where the painting was originally positioned in the church, but it was possibly hung over a side altar or over the partition dividing the secular community from the choir of the Humiliati monks who officiated in the church.

For the first time in Western history, the Madonna and Child appear to be inserted into a well-defined space: Mary sits on the throne like a queen – hence the name Maestà; the well-conceived perspective gives the idea of a real environment. The composition is symmetrical, and its main focus is the Virgin holding the Child on her lap, like any mother would; Jesus is giving his blessing with his right hand and holding a rolled-up parchment in his left, a symbol of wisdom.
On both sides of the throne, angels and saints are arranged in a specular way, depicted in profile or three-quarter view. The angels kneeling at the Virgin’s feet offer roses and lilies, symbols of purity and charity. The alternance of red and blue on their wings denotes the essence of the angelic body, made of fire and air. Right behind them, two saints are standing and holding a crown (once again a reference to the “majesty”) and a pyx, a liturgical object alluding to the Passion of Christ. Behind them are groups of saints partially covered by their own halos and by the throne, thus implying the existence of a concrete space within which the figures stand.

The scene is simple and essential, without excessive decoration, although some elements linked to the Byzantine tradition are still present, such as the gold background and the hierarchy of scale (the Madonna and Child are larger in size than the angels surrounding them).
The figures have a fair and natural complexion, their clothes are no longer flat and homogenous in colour and, while the light is still from frontal angles and idealised, the chiaroscuro on the fabric folds creates a sense of volume.

The innovative aspect is linked precisely to the representation of the space and volume of the characters: Giotto creates depth by superimposing the figures and using axial perspective. Superimposing figures by partially hiding their faces – as with the saints in the painting – was a new practice in the Middle Ages. At that time, the paintings were usually made to clearly show the faces of all the characters. The structure of the throne is equally innovative, achieved through the convergence of perspective lines towards a central axis. Thus, the space loses the aspect of divine unreality and acquires the credible concreteness of everyday life.

The “old figures” – linked to the Byzantine style – were often rigid, two-dimensional and lacking in emotional participation; Giotto goes against this tradition, revolutionising the way of painting and representing human figures, and moving towards figurative naturalism. The artist is not only praised for his painting skills, but also for his inventive genius and his unique way of interpreting nature, history and life.

Thus, Giotto ceases to be only a skilled craftsman working within the framework of a tradition at the service of supreme religious and political powers, but rather becomes the historical figure who changed the idea, the methods and the purpose of art, exerting a profound influence on the culture of his time.
Comparing the Madonna and Child with the other two present in Room 2, of similar shape and depicting the same subject, it’s easy to understand the difference between an art that was still partly Byzantine and a completely new kind of art mastered by Giotto.

Unfortunately, there is still little information about the artist’s life and early years of activity. According to Giovanni Villani’s Nuova Cronica, Giotto was born around 1266 in Vespignano in Mugello, near Florence, and died in Florence in 1337.

Of all the testimonies of the time to Giotto’s talent and fame, the most famous one is undoubtedly the tercet that Dante Alighieri dedicated to the artist in Canto XI of the Purgatorio, Divine Comedy:

«In painting Cimabue thought he held
the field, and now it’s Giotto they acclaim –
the former only keeps a shadowed fame.»

Dante himself, so proud of his own dignity as a man of letters, recognised in Giotto a peer, whose position with regard to the masters who preceded him is similar to his own with to the poets of the dolce stil novo. Moreover, the legend that Giotto was an apprentice in Cimabue’s workshop and soon surpassed his master seems to have originated from Dante’s verses, since it is not documented by any other source. In 1334, three years before his death, Giotto was appointed chief architect to the Florence Cathedral Santa Maria del Fiore, a recognition of the painter’s absolute supremacy in the Florentine art scene.

Between the poet and the painter there were more differences than analogies. Nevertheless, despite having worked in different fields and with different intentions, Dante and Giotto are considered two great pillars of a new culture which was aware of its historical Latin roots.

The Madonna and Child is a traditional iconography with a strong devotional character, so Giotto could not be completely innovative in painting it, as he had done instead when he decorated the Scrovegni Chapel in Padua, depicting the stories of Joachim and Anne and of Mary and Jesus. Among his works on panel, however, the Maestà Ognissanti is the most stylistically close to the Padua frescoes.

Giotto did not invent new painting techniques, but he profoundly transformed the artistic process: according to the artist, the value of art does not lie in the technical perfection of the execution, but rather in the power and innovation of the ideation. And it is precisely from Giotto onwards that drawing started to be considered the necessary premise of every artistic production.

What most characterizes the Giotto revolution is the representation of space, depth and volume, thus marking a return to the realism of ancient art after the rigid, frontal vision of Byzantine art, and the beginning of an independent Western art. Although Giotto’s perspective is still intuitive, unlike the theory of perspective developed in the 15th century, this leading artist was the starting point of the revolution that would lead to the Renaissance a hundred years later.