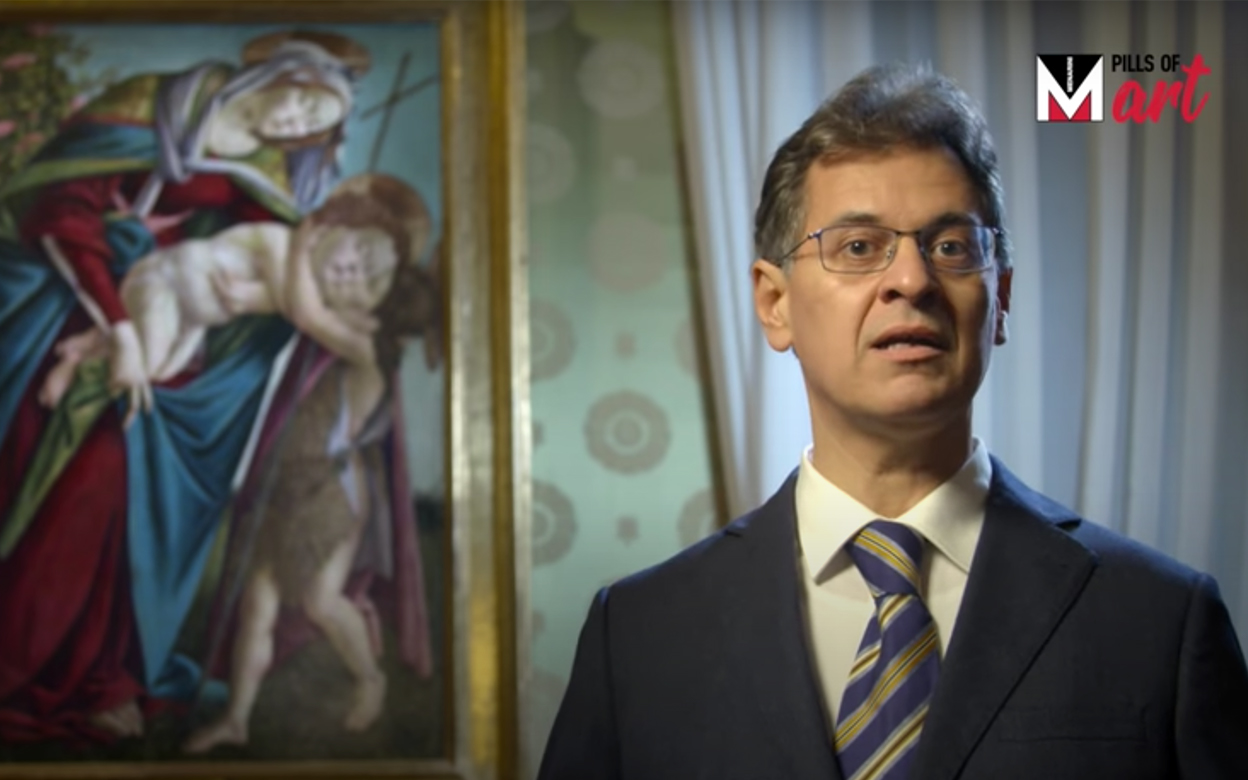 In the Palatine Gallery of Palazzo Pitti in Florence there is a painting of a timeless beauty: Madonna with the young St. John the Baptist.
The art expert Giovanni Matteo Guidetti leads us to the discovery of this late work by Botticelli through another video by Menarini – Pills of Art.

The painting, whose provenance is unknown, has not always been considered autograph of the Florentine painter Alessandro Filipepi, better known under the pseudonym of Sandro Botticelli.

The restoration of 1973-76 allowed – beyond the partial abrasions due to the old cleaning – to rediscover the pictorial ductus, still well preserved. This renewed aspect of the work has led critics to reconsider its authorship to the great artist, also re-evaluating the unique pathos of this traditional sacred scene. The date of this tempera on canvas (134 x 92 cm) was indicated between 1495 and 1500.

The composition is dominated by the figure of Mary, impalpably veiled with melancholy, rich in sacredness and mysticism. The Virgin, with the Child Jesus in her arms, is leaned towards Saint John the Baptist, to allow the youths to embrace each other. Between the two of them emerges the cross-shaped stick of the Baptist, symbol not only of the Saint but also of the future death of Christ.

Behind the Madonna is the rosebush – emblem of the Virgin – which alludes with its red flowers to the color of the blood of the Passion of Christ. Even the almost horizontal pose of the Child Jesus and his closed eyes seem to herald his predestined death. The mood of the figures is serious and meditative, while the relationship between Mother and Son appears more intellectual than affectionate. However, the empathic closeness of the three sad faces helps to permeate the painting with a deep feeling of sadness.

The setting, almost without background, intensifies the monumentality of the three sacred figures and makes solemn the moment represented; thus, enhancing the intense spirituality. The painting – also thanks to the vivid colors and the fusion of body masses – expresses in fact the exasperated mysticism influenced by the sermons of Girolamo Savonarola, which characterizes the works of Botticelli at dawn of the sixteenth century.

The painter of the sacred and the profane

Alessandro Filipepi, “the Botticelli”, was born in Florence in 1445 from a modest family, and learned the goldsmith’s art in his brother’s workshop. It is probably here that his nickname originates, because in Florence the goldsmiths were called “battigelli”. Thanks to the chance encounters with painters at the goldsmith’s workshop, Botticelli discovers his true passion and becomes an apprentice of Filippo Lippi, one of the most important painters of the city.

During his training, from 1464 to 1467, the artist learned from Fra’ Filippo – Botticelli’s first real master – to paint elegant figures of rarefied ideal beauty, drawing graceful and refined shapes with soft and defined lines. To this period goes a whole series of Madonnas, which reveal the direct influence of the teacher on the young student.

Botticelli does not renounce what he learned as a goldsmith: the ability to draw elaborate details often embellished with gold, characterizes his painting. The artist’s training as a goldsmith and the influence of his mentor Filippo Lippi will be constantly present throughout his production.

Around 1480 Sandro Botticelli is esteemed among the first painters of Florence. Here, he spent almost all his life, except for a short stay in Rome, which brought changes in his style, because stimulated by direct contact with the classical world. In 1482 he was commissioned to fresco some scenes in the Sistine Chapel, along with the most famous artists of the time, such as Domenico Ghirlandaio, Pietro Perugino, Cosimo Rosselli.
The vision of ancient Rome deeply impressed Botticelli: in his frescoes he inserts arches and classical sculptural decorations, embellished with gold details, also playing the guessing game of confusing the real places and characters with the biblical ones.

The persistent search for the ideal beauty leads the artist to gradually detach himself from the initial models and to develop a style not only different from that of his contemporaries, but unique in the Florentine artistic panorama of the time.

Botticelli’s fame is mainly linked to two works painted for the House of Medici: Spring and Birth of Venus, both linked to myths with a deep philosophical and literary meaning.

The artist, beloved by the Medici, assimilates the humanistic tendencies of his patrons and is among the first to paint portraits and to illustrate literary works, such as some scenes from the Divine Comedy by Dante and Boccaccio’s Decameron.

The torments of recent years

Through the splendour of the mythological scenes and some hidden allusions, Botticelli celebrates the golden age inaugurated by the Medici in Florence, interrupted by the death of Lorenzo the Magnificent in 1492.
For Botticelli, the Medicis’ expulsion means the loss of his main clients. The political difficulties are accentuated by his spiritual crisis, due in part to the sermons of Girolamo Savonarola, the Dominican friar who denounces the corruption of the Medici Family (and the Florentines, in general) and invokes the return to the faith.

Botticelli’s last works in fact reveal a spiritual torment – unknown to the previous production – and surprise for the expressive intensity of the figures, which appear much more modern.
The artist denies the mythological and pagan themes, the freedom in costumes and the ostentation of luxury, signs of that inner crisis that will culminate in the exasperated mysticism of the last phase of his career.