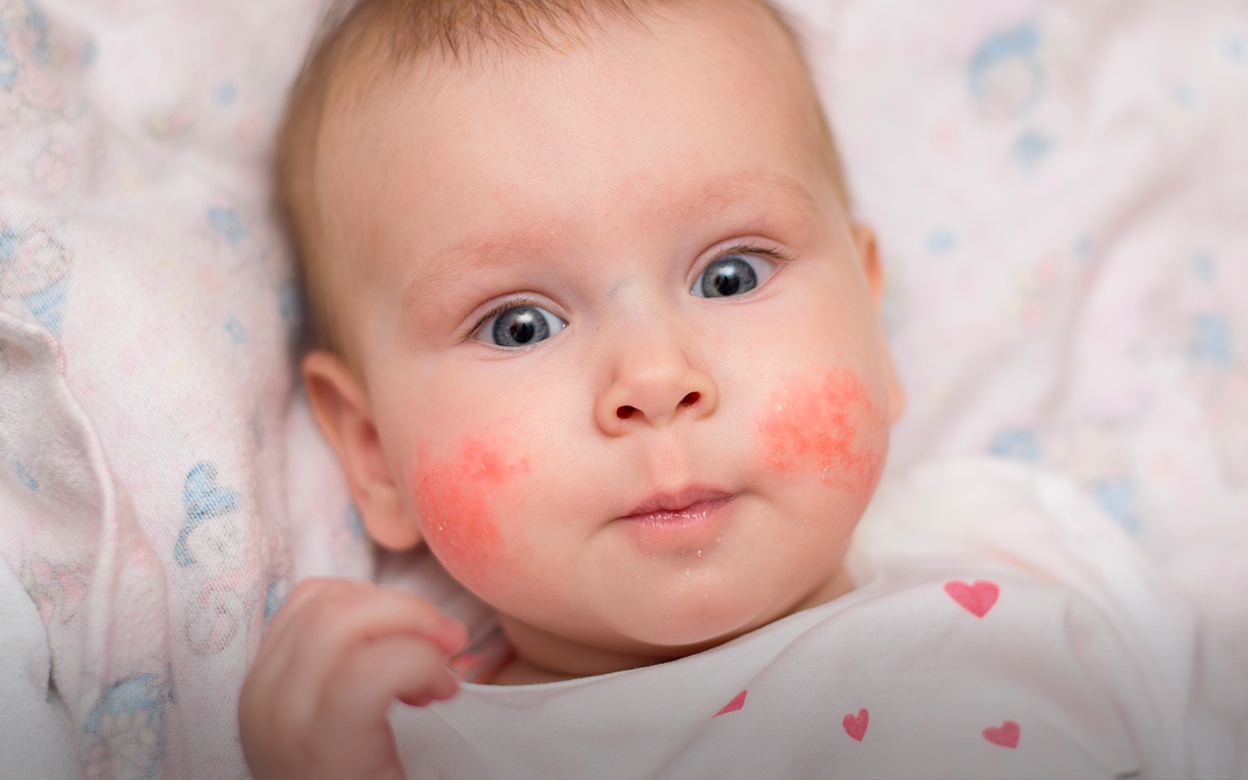 The skin is our body’s largest organ and is made up of various tissues. It works as a touch point with the outside world and, at the same time, as a real anatomical barrier. Although the skin is extremely thin, it performs many functions, including providing protection for our body, acting as our first defense against germs and other potential environmental hazards, and using sunlight to synthesize vitamin D. Lastly, the layer of fat tissue immediately beneath the surface of the skin helps ensure that fluids remain within the body.

Dermatitis is an irritative and/or inflammatory condition of the skin. Itching, redness and swelling are the main symptoms of dermatitis. Due to the inflammatory processes, especially if they are persistent, the skin undergoes a series of changes that affect its normal functions, especially its barrier function.
There are various types of dermatitis, such as irritant or allergic contact dermatitis, atopic dermatitis and chafing.

Irritant contact dermatitis can be defined as the cutaneous response to the toxic effects of a wide range of environmental exposures. The most frequent sources of exposure can be “unspecified” chemicals, water, detergents, dust and dirt.
A very frequent and particular form of irritant contact dermatitis is diaper dermatitis, also known as nappy rash, which mainly affects babies between 9 and 12 months. Nappy rash is caused by skin rubbing against a wet, soiled diaper or another part of the skin.

Atopic dermatitis is probably the form of eczematous dermatitis that can cause the most discomfort, as well as inflict a substantial psychological burden on patients. It is a chronic inflammatory skin disease that affects 10 % to 30 % of children and 2 % to 10 % of adults, and is characterized by intense itching and recurrent eczematous lesions. Although it is probably the result of hereditary factors and irritant triggers that cause the skin to become red, dry and itchy, the exact cause of this disease is unknown.

Most commonly, atopic dermatitis first appears in the second or third month of life and usually heals spontaneously during teenage years.
In the neonatal phase, atopic dermatitis mainly affects the baby’s face (cheeks, forehead, chin), neck and chest; in the infant phase (two to ten years of age), it appears mainly on flexural folds, such as elbows, knees and wrists.
The progression of the disease is characterized by periods of improvement alternating with periods of “reactivation” of the dermatitis. The period of improvement occurs most frequently in summer, when the eczematous lesions may give way to lighter patches, only to usually reappear in the colder part of the year or as a result of infection. In some cases, however, the disease continues to appear even after the age of ten and into adolescence and adulthood.
In adulthood, atopic eczema mainly appears in the upper torso and can also occur as nummular dermatitis, i.e. discoid or coin-shaped eczematous lesions that can affect any part of the body (usually with the exception of the face and the scalp).

The main components to the management and treatment of dermatitis, and atopic eczema in particular, are essentially four: prevention, daily skin care, anti-inflammatory therapy, and other complementary modalities.
The skin of atopic patients is extensively and persistently dry. Therefore, it is essential to take steps to prevent the dryness from increasing or the skin from becoming infected. Prevention is best achieved by trying to avoid irritants and allergens and to reduce the dryness of the skin, mainly via daily use of skin moisturizing creams or emollients, which are essential for daily skincare. Certain environmental factors should also be avoided, such as excessive cold or heat, wind and sweat, as they can cause and exacerbate dryness and itching. It is also advisable to use cotton clothing, rather than wool or synthetic fabrics, as these can also cause skin irritation.
In the case of anti-inflammatory therapy, corticosteroid creams and oral antihistamines may be essential for treating the more acute phases of dermatitis. However, the doses and mode of administration must necessarily be determined by a doctor.

Other complementary modalities may include dietary changes prescribed by a specialist, on the basis of specific diagnostic tests. Furthermore, it is becoming increasingly evident that oxidative stress is involved in a variety of skin diseases and that antioxidative strategies can prove to be effective and easy methods for improving these conditions, so again it will be up to a doctor to assess each specific case.
For many years, atopic dermatitis has been considered to be the first manifestation of atopia (the genetic predisposition to hyper sensitisation towards environmental allergens), as well as the initial step in the so called “atopic march”, which leads to asthma and allergic rhinitis.
The itching caused by atopic dermatitis is often so intense as to interfere with sleep, daily activities, study and work. In addition to physical discomfort there is also psychosocial discomfort, caused by the often very visible symptoms caused by the disease.

Lastly, another common form of dermatitis is chafing. Caused by prolonged friction, humidity or contact with irritating fabric, chafing is a very common skin condition.
Chafing usually occurs on the thighs and buttocks, but can also affect the groin, feet, armpits, folds area and nipples (during breastfeeding). Usually, this type of dermatitis appears as a mild and red rash, but in more severe cases it may also include swelling, bleeding and crusting.
Causes of chafing may include being overweight, breastfeeding and activities that combine sweating and repeated body motions (such as running, cycling, rowing, aerobics, weight lifting and exercise).

Dermatitis is therefore much more than just a skin condition, and can be truly disabling for those who suffer from it. The Mission of RELIFE – the new company part of Menarini Group – is to develop a revolutionary approach to skin treatment through the Group’s pioneering scientific tradition and high quality standards, in order to improve the quality of life of people suffering from skin diseases.