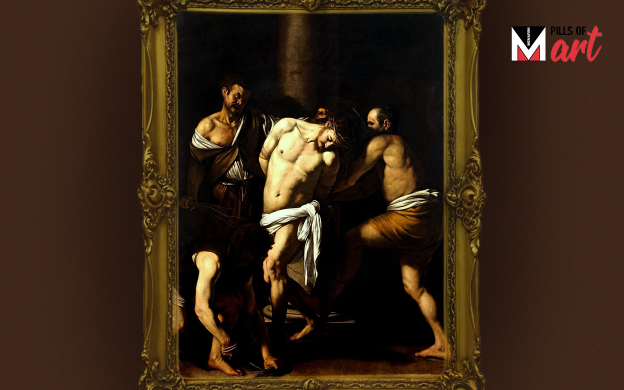 Naples, Capodimonte National Museum. The art historian Claudio Sagliocco guides us through this beautiful museum to discover a masterpiece by Caravaggio, realized during his Neapolitan stay: Flagellation of Christ.

Michelangelo Merisi da Caravaggio – better known simply as Caravaggio – was active in Rome for most of his artistic life, but after being sentenced to death in May 1606 for the murder of Ranuccio Tommasoni, escaped from Rome and moved to Naples, under the protection of Carafa Colonna family.

As often happened with the works of Caravaggio, this piece of art was quite troubled, as evidenced by many regrets visible through the x-rays of the painting. Thus, to believe that it was made in the two different Neapolitan stays (1606-07 and 1609).

Flagellation of Christ by Caravaggio

The main feature of the work is Christ, illuminated as a large reflector whose dazzling light comes from top left. The glow of Jesus is in stark contrast to the almost grotesque ugliness of the torturous, even more frightening because of the darkness in the background surrounding them.

The face of Christ is completely abandoned. His head, facing his left shoulder, could almost slide to the ground with his whole body, if it were not sustained violently by a torturer. The rest of the body is also defenseless, supported by the torturer on the right, who is kicking the back of Jesus’ right knee. In the foreground we can see the third torturer, who has the face completely darkened, a detail that makes the scene even more bleak.

The suffering of Christ is redeemed into a divine light which alludes to the redemption, in contrast to the black round dark of the canvas: Jesus accepts his destiny with extreme pain.

This technique gives a theatrical tone to the scene: the sinuous and soft movements of Christ contrast the violent and rigid gestures of his torturers, as well as good and evil. The symbolic point of view culminates in the choice of chiaroscuro.

The masterpiece had long been a popular subject in religious art, but it does not properly refer to classical religious iconography. The setting of the composition was taken from a famous example of Roman painting: Flagellation, a fresco by Sebastiano del Piombo, which probably Caravaggio had seen in the church of San Pietro in Montorio in Rome. Caravaggio, inspired by the Christ at the column depicted on del Piombo’s painting, retained that sense of flagellation and reduced drastically the picture space.

Caravaggio left an indelible mark revolutionizing Neapolitan painting, so the Flagellation of Christ was a turning point for Naples. His way of painting – completely outside the conventions of the time and far from the most eccentric style of late Mannerism, but linked to the concreteness of reality and spontaneity of emotions – marked overall the history of painting, making Caravaggio immortal.

Find out more about Menarini Pills of Art.