Federica Pellegrini and Ian Thorpe: the virtuous example of the 2022 edition of the Fair Play Menarini International Award 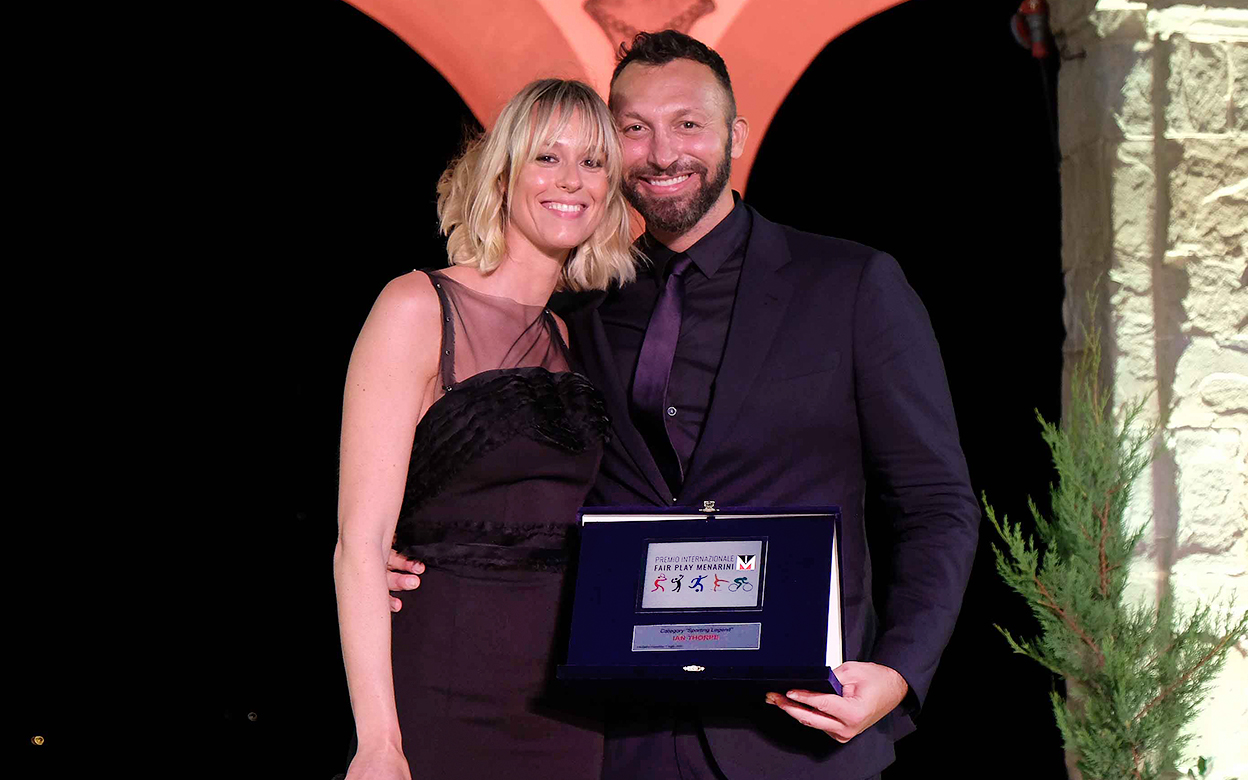 The 2022 edition of the prestigious award did not disappoint the expectations. Many champions and sport personalities became the protagonists of three unforgettable evenings, proving once again that the Fair Play Menarini event is a highlight of the summer.

The main goal of the three events held between Florence and Castiglion Fiorentino was sharing experiences about the world of professional sport. The champions attending the events took the chance to reflect on their careers in front of an audience, and explained how Fair Play is not only a set of behavioral rules, but a direct consequence of a life marked by ethics, sacrifice and endless passion for their discipline.

The 2022 Fair Play Menarini International Award began on Tuesday, the 5th July, with Ivan Zazzaroni hosting the talk show ‘The Champions tell their stories‘. It was a unique opportunity to meet world-class athletes such as Ian Thorpe, Alessandra Perilli, Edwin Moses, Casey Stoner, Giacomo Bertagnolli and Andrea Ravelli, all of whom were awarded during the final ceremony in Castiglion Fiorentino. Together with them were the Mayor of Florence Dario Nardella, Cosimo Guccione, Councillor for Sport of the Municipality of Florence, Ennio Troiano, member of the Board of the Fair Play Menarini Foundation, and Silvia Salis, Vice-President of the Italian National Olympic Committee (CONI). 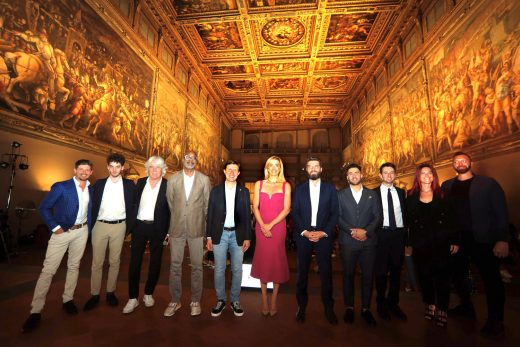 The splendid setting of the Salone dei Cinquecento in Florence was enriched by the notes of the talented violinist Giovanni Andrea Zanon, who was joined by Mayor Dario Nardella for a short performance.

Over the course of the evening, Ennio Troiano recalled how the link between corporate dynamics and sport is indissoluble: “Our dream has come true: to bring Fair Play values into a different sphere thanks to the stories of great sportsmen and women. These athletes have shown us that you can succeed, overcome obstacles, through talent, hard work and commitment. The same goes for my company: we must find cures without taking shortcuts, and always respecting the rules with maximum commitment. That is the only possible way.“

The event then focused on the stories behind the champions’ success, because victories, like Olympic medals, are never the product of chance, but rather the result of long and sometimes difficult career paths.

As in the case of the visually impaired skier Giacomo Bertagnolli and his guide Andrea Ravelli. Two unstoppable athletes in terms of fortitude and attitude, bound by a friendship and trust that turns into pure synergy during competitions. For them, Fair Play starts with their companion, with whom they share victories and defeats, mistakes and achievements. For Giacomo and Andrea, there is something more besides success: the knowledge that they inspire many disabled and non-disabled people to react, to challenge themselves and face their problems.

Another example of perseverance is that of Alessandra Perilli, the first Olympic medal in the history of San Marino, whose specialty is target shooting. For her, daughter of shooters, mother of a child and flag-bearer of a small nation, the constant challenge is having to deal with the mental stress caused by a discipline in which millimetric precision can mean victory or defeat. Alessandra also emphasized the importance of sporting friendship between female shooters: “Our sport is very individual. Therefore, if one of us wins, it naturally means that the others have lost, and it is important that the victory is recognised sportingly. A hug or a pat on the back to the winner can carry a lot of meaning.“

Hardship, however, is part of the game and can often turn into an opportunity. As in the case of the chlorine allergy that forced him to swim with his head out of the water, only to later become one of the greatest champions in the history of swimming: such is the life of Australian swimmer Ian Thorpe. A true star of water sports who molded his career on self-control and on the ability to activate rigorous mental processes that can be decisive for the result.

On the subject of loyalty and fair play, he began his message to the audience in Italian, in order to underline his deep respect for the Fair Play Menarini International Award:  “Fair play is essential and is about the integrity of sport. Sport is something that people still have faith in and believe in. We have faced difficult times in the world, first a pandemic, now a war and we are looking at global warming issues. We don’t trust what other people do. Sport, on the other hand, has a unique ability to bring people together and gives us a mutual understanding to improve as a society. If there is justice and correctness in sport, we will see a new generation of athletes that can inspire all future generations.”

Simple and profound concepts, followed by the wishes of track and field champion Edwin Moses, who is committed to spreading the culture of clean play through a relentless fight against drugs and discrimination. In addition to his sporting career, Edwin Moses has undertaken an academic one, graduating in physics and engineering, and is a shining example of how one can work towards a better sport through knowledge of multicultural contexts: “There are many fields where fair play is very important, and where we need more fair play: I am thinking in particular of anti-doping, but I am also thinking of the issues of sexism and racism.”

The contribution of retired professional motorcycle racer Casey Stoner was also very meaningful. To the winner of a world championship with Ducati (after 30 years of the Bolognese manufacturer’s absence from the podium), money and fame were never the most important things. He retired early from the international stage to be with his family and enjoy life. Despite Stoner’s early departure from the circuit, his message on fair play resonates loud and clear: “There are many different angles from which you can see fair play: for me it’s an old Australian saying, ‘Do to other what you would like to see done to you.”

The former biker was referring to the highly competitive atmosphere in the race, continuing: “In our sport there are many dangers. Things happen fast and you race close to others at 300 km/h, so you have to trust those who race close to you. It’s vital to give and receive respect. There have been many cases of accidents caused by the recklessness of motorcyclists. I always tried to give respect to everyone, perhaps not always succeeding because sometimes I got overwhelmed by the situation. Then I started to receive respect in return and I noticed that the number of accidents dropped significantly. And this was the proof that if you show fair play, you will receive fair play in return.”

The words pronounced in the Salone dei Cinquecento by CONI Vice-President Silvia Salis introduced the central themes of the award ceremony in Castiglion Fiorentino that place sport in its right dimension: not only an environment of inspiration and success, but also and above all a meeting place for humble, hard-working and motivated people. “The stories we heard tonight all point to one important thing: talent is overrated, among the great champions of sport it is hard work that makes the difference. The importance of work should not be underestimated. These are people who never gave up and always found the right way to achieve their goals, even through the longest and most difficult journey.“

The splendid final act of the celebration of fair play, i.e. the award ceremony hosted by Lorenzo Dallari and Rachele Sangiuliano, was flooded by the light of the ‘Divine’ Federica Pellegrini, multi-decorated Italian swimming champion and eternal pride of Italian sport, who took the opportunity to reflect on her dazzling career in which she has always tried to outdo herself:

“I was born to do my sport. Over the years it was easy to go on and find motivation, because by swimming I was doing what I loved. At every moment of my career I have always tried to raise the bar, starting when I was 16 and participated in the Beijing Olympics. It was an incredible, wonderful journey, which I decided to end with last year’s Olympics. Now a new chapter of my life opens: I will be a member of the International Olympic Committee and will be in charge of representing athletes.”

Former AC Milan champions Roberto Donadoni and Massimo Ambrosini did not fail to mention how strategic team spirit is in the training of new generations of sportsmen.

An especially moving moment was when Fabrizio Ravanelli received the ‘Paolo Rossi Special Award – Youth Role Model’. The former Juventus and Italian national team player was awarded personally by Federica Cappelletti, wife of the unforgettable Paolo Rossi, who exactly 40 years ago managed to bring the Azzurri to victory in the 1982 World Cup in Spain.

Ravanelli celebrated his friend Pablito and added an important thought for young people, reminding them that to achieve great goals together, there are roles to be respected in every team. Maybe even by putting yourself at the service of who is more talented, keeping your head down and maintaining absolute dedication to the standards of top-level sport. A lesson borrowed from Paolo Rossi himself, always at the service of his team throughout his 15 years of professionalism.

Another edition that once again saw Castiglion Fiorentino, with its wonderful main square and the Loggiato Vasariano, turn into the global capital of Fair Play for one night.

“We are proud to to host such a prestigious event for its tenth consecutive edition,‘ said Mario Agnelli, mayor of Castiglion Fiorentino, ‘In ten years, many sportsmen and sports personalities have passed through Castiglion Fiorentino, a proof that fair play is an essential value in all our lives. This year we were able to admire and meet a true parade of stars once again: an incredible group of guests for an award that has always given us great emotions and that not even the pandemic has managed to stop.“

The categories and winners of the XXVI Fair Play Menarini International Award are: