Adoration of the Magi by Sandro Botticelli 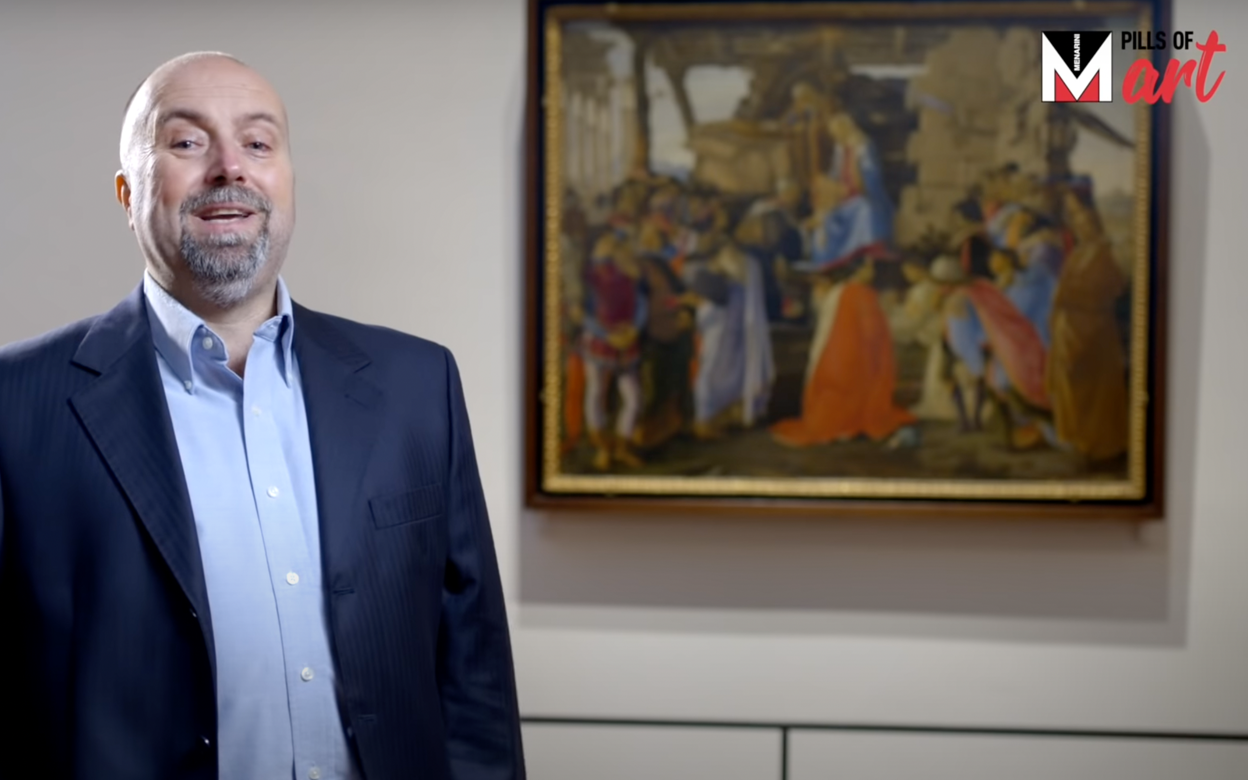 This Menarini – Pills of Art video will take us to Florence, in the beautiful Uffizi Gallery, where Florentine art expert Bernardo Randelli will lead us to discover one of Sandro Botticelli’s masterpieces: the Adoration of the Magi.

The Adoration of the Magi

The work dates back to 1475 and was commissioned by Gaspare di Zanobi del Lama to decorate his funeral chapel in Santa Maria Novella. It is a celebration of the Medici family: in fact, many prominent figures of the powerful Florentine dynasty are portrayed as the Wise Men or among the crowd gathered around the Holy Family.

In a central position we can recognize the head of the Medici family, Cosimo the Elder, who has already delivered his gift and is kissing the Child’s feet. To his right, standing a step lower to symbolize the dynastic order, we find his sons Giovanni (dressed in white) and Piero the Gouty (dressed in red). On either side of the composition we can also see two other very important members of the Medici family: the brothers Giuliano and Lorenzo the Magnificent.

The Medicis are not the only familiar faces in the painting: in fact, among the crowd around Giuliano we can also see the poet Poliziano and the philosopher Pico della Mirandola. Moreover, to the right of the painting are the commissioner of the work, looking directly at the viewer, and Botticelli himself, who stands out in his yellow robe.

With this tempera on panel painting, Botticelli makes an innovative stylistic choice: until that time the Adorations of the Magi traditionally saw the Holy Family placed to one side, in profile, while the Magi and the men in their retinue proceeded in a line toward it in a sort of procession.

Botticelli, on the other hand, chooses to adopt a frontal view: the nativity hut is in a central position, raised on a rock, and the crowd of worshippers, seen in perspective view, is placed on the sides. The Virgin and Child, with St. Joseph behind them, are in the center of a perspective triangle that directs the viewer’s attention precisely towards her and the divine light that surrounds the Family. In the upper right corner we also catch a glimpse of a peacock, a symbol of immortality.

Botticelli’s masterful hand gives the characters a pensive and melancholic air, typical of the artist’s portraits, and the atmosphere of the work is fairy-like, almost unreal, permeated by a twilight fading to gold. An unmistakable style, unmatched in the art scene of the time.

Would you like to see more of Botticelli’s masterpieces? Watch our latest Pills of Art video: Madonna of the Magnificat by Botticelli.