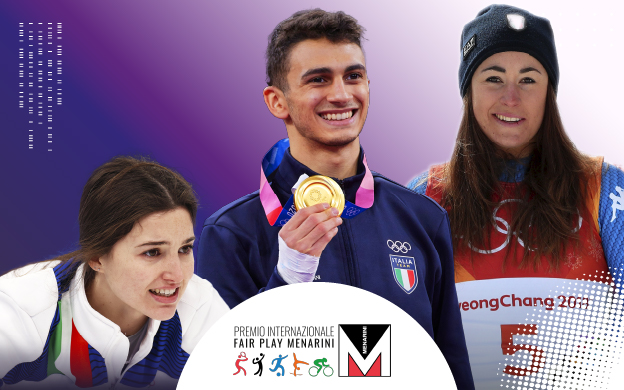 2022 has been a fresh restart for sports. The world’s major sport events were back to being held under safe conditions, and along with them were the champions who interpret the values of fair play in multiple disciplines.

Since the Menarini Group became Title Sponsor of the Fair Play Menarini International Award in 2012, the most important sport events in the world have seen great interest and participation.

The past 12 months were marked by many incredible performances involving athletes that have been awarded in the latest editions of the Fair Play Menarini International Award.

Beginning with the Gold Collar for Sporting Merit awarded by CONI to short track skating champion Arianna Fontana (2018 “Sustenium” special award), gold medalist at the Beijing Winter Olympics in the 500 meters, individual silver in the 150 meters and silver with the mixed relay, who was honored with the prestigious award last November. Like Fontana, another star of winter sports, Stefania Constantini, winner of the 2022 “Educational Values of Sport” Fair Play award, Olympic gold in Curling and silver at the European Championships held in Sweden in November 2022, also received the CONI award.

Her success is even more significant, because it triggered unprecedented interest in curling, and was achieved in a discipline that is historically a specialty of Nordic countries.

Along with this pair of brilliant athletes, young Benedetta Pilato, who was awarded in 2020 in the Fair Play category “Youth Role Model”, was able to win gold in the 100-meter breaststroke specialty at the World Swimming Championships in August 2022. She also scored another important record: at 17 years old, Benedetta Pilato is the youngest Italian swimmer to win gold at the World Championships, breaking Novella Calligaris’ record who won the women’s 800m freestyle in 1973 at the age of 18.

2022 has been a magical year for Vito Dell’Aquila, a Taekwondo athlete, winner of the Fair Play category “Social Values in Sport” in 2022, who went from winning gold at the Olympics to graduating as World Champion in the -58kg at the Guadalajara World Championships; as well as for the duo composed of Federica Cesarini and Valentina Rodini (Fair Play Special Award “Italy at Heart” 2021), bronze in the Lightweight Doubles, at the European Rowing Championships in Munich.

Football was full of rewards for Eleonora Maria Goldoni, winner of the “Fair Play and Solidarity” award in 2021 and currently starring with Sassuolo in the women’s A series championship. After a difficult start, her team was able to regain ground and reach seventh place, also thanks to the young striker’s goals.

Having switched from competing to coaching, Marco Bracci and Matteo Marconcini are doing well in volleyball and judo, respectively. The former, coach of Marsala Volleyball and winner of the 2022 Fair Play category “Lifetime achievement in sport”, was able to lead his team to the victory of the poule salvation in the A2 national championship, while the latter, honored in 2021 in the Fair Play category “Promoting sport” is the architect of the victories of the Carabinieri women’s team in the Italian team championship last November.

After a silver medal in the Olympic slalom, Federica Brignone has also become Italy’s most successful female skier in the World Cup, where she has won on 20 occasions, most recently in Courchevel last March. After winning silver in the downhill just 23 days after her accident in the last World Cup, Sofia Goggia scored another victory on the snow in Lake Louis, opening the 2022/23 version of the World Cup at its best. But she was also able to outdo herself once again and accomplished an even greater feat: on December 18, she dominated the downhill in St. Moritz despite the fracture in her hand that occurred only 24 hours earlier. An incredible success that allows her to tie her friend Federica Brignone’s own number of World Cup victories.

The results of Dorothea Wierer and Federico Pellegrino are just as significant. The Bruneck-born champion won the first medal at the individual level in the Olympic history of the Italian Biathlon and continued her incredible year with repeated victories in the World Cup, while the cross-country skier from Valle d’Aosta managed to replicate his Pyeongchang silver medal, coming within a whisker of overall victory in the ‘sprint’ category.

Lastly, the beautiful story of Giacomo Bertagnolli, flag-bearer of the national team at the Beijing 2022 Winter Paralympics and gold medalist in slalom together with his guide Andrea Ravelli. The Trentino skier (Fair Play 2022 award in the “Sport beyond Sport” category) can already put an extraordinary year on record. Adding to it is the event on December 22, when for the first time in history, an athlete with disabilities will open for the slalom racers competing in the World Cup classic in Madonna di Campiglio. Bertagnolli’s goal is simple and noble at the same time: to be a spokesperson for the entire Paralympic movement that, also thanks to his performances, has become a source of strength and inspiration for Italian sport.